After a six-day sea voyage from Canary Islands to Cap Verde Islands, we were happy and eager to arrive at the island Sal within the archipelago of Cap Verde. Taking a day of rest was needed to relax after the six-day trip, each of us taking three hour shifts to fulfil 24-hour navigation.

Daytime hours of navigation are easier to cover compared to the nighttime hours as daylight keeps us more occupied and distracted.

After our arrival in the bay of Palmeira and throwing anchor, a rest was taken for the day. The next day (Dec 23rd), early morning, at 8am, we spotted a sail yacht approaching the bay. Next to the sail yacht, a dinghy was ‘attached’ towing the larger sail yacht. Getting into the bay and with extremely limited maneuverability, the sail yacht (later identified as SY Capa cabana) would have a tough time getting into the anchorage spot. Quickly contact via VHF was made and two more dinghies from other yachts were dispatched to help.

After the yacht was safely secured on anchor, both Thierry (SY Ornella) and I set out to go onboard and see what the problem was that they encountered. The main driveshaft of the engine was disconnected from the engine and with this event happening, the driveshaft slid out of the engine and blocked the rudder. This in total incapacitated both the engine and sailing capacities of the sail yacht. This happened three days ago and so their only solution was to use their dinghy with outboard (a 5hp engine) and tow the combination to the nearest safe place which was the Bay of Palmeira. This towing, being in an eight-foot dinghy alongside a 40ft sail yacht is a nightmare that they had to endure for three days and do not forget, three nights as well! But they made it safe to the bay of Palmeira and this is where SY Blowing Bubbles was awaiting them. 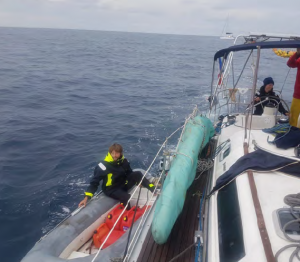 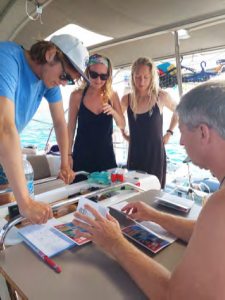 A quick plan to restore the functions was made by diving under the boat, pushing the propellor shaft back into the hull, sliding it back into the housing, tightening the nut (and preferred to prevent future problems, applying some Loctite glue) and done! Easier said as done and both Thierry and I set off to the underwater ship to slide the shaft back into place. With our feet against the rudder, to get us some leverage, we managed to slide it in, inch by inch until after 10 minutes of some serious pushing and turning, the shaft was back in its place! Next was attaching the shaft to the housing and some happy sailors saw that the engine could be used again, the rudder was free and sailing capacities restored. What a day, what a cheerful moment!

All four young French sailors realized all too quickly, that this problem could not have been solved without scuba diving and could not stop asking about scuba. How, where, when, what, … for hours we explained what scuba could mean to them! 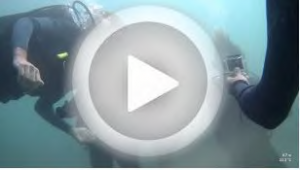 The four young French divers signed up for a Try Scuba onboard SY Blowing Bubbles and we did what we are good at…giving them the best view of the underwater world. During a three hour Try Scuba, we explained to them all the needed theory and afterwards took them down on a pristine reef outside the bay of Palmeira and showed them in real-time what scuba diving was all about! Their smiling faces lead to multiple mask clearings (you remember that feeling?), we showed, and they repeated the basic scuba skills and during this all, the fishes kept coming our way, wondering what this group of strange bubble makers was doing around their habitat. Click the image to watch the video of the dive.

During the dives, we met 1000’s of fish, the waters of the Cap Verde islands are very fish filled and a wide variety of Atlantic Ocean fish is found here. The waters do not have large predators here, so the reef fish are abundant and very colourful. With the sun high up in the zenith of the sky, the reef gave out the best of colors, showing its corals in the most amazing colours. All this was also put on video, as during the dive, Seppe, crew onboard SY Blowing Bubbles, was taken his NAUI Advanced Scuba Diver Course and wanted to get more experience with underwater videography. As we carry the new Paralenz Vaquita camera onboard the SY Blowing Bubbles, this was the ideal opportunity for him to practice and as a result, get the four young French freshly introduced scuba divers a lifelong souvenir of their NAUI Try Scuba in the Cap Verdes.

After two dives along the reef, in 23°C water, the 4500psi/300bar dive tanks we use onboard SY Blowing Bubbles were getting in reserve mode and so, it was time to get back to the surface and face the reality that the day had faded away and it was time to think about some hungry stomachs!

Back onboard SY Blowing Bubbles, we had planned to surprise the four Try Scuba Divers with some appetite and stomach pleasing items: freshly made pizzas! Do not forget, we are floating at anchor in a bay outside a remote island…there is not a Pizza Hut to call or an Uber Eats to deliver you a pizza…Our kitchen onboard the SY Blowing Bubbles is not small, but to produce eight pizzas, to feed eight hungry divers, is not a task up to our kitchen either! So how did we solve the problem?

During our walk into the small town a day earlier, we came across a bakery that provided us with bread and some buns. When we asked what else they could make (as Christmas was coming up), the owner told us that he was doing some specials and guess what? Pizzas were on the menu!

So, we ordered immediately eight pizzas (this gave the owner a little scare, this is a serious order) and set a time for pick up the next day at 4pm. Now we only needed another dinghy/boat to get there and bring them to us! We made a deal with another sailing catamaran, SY MIRA and their crew of four, including Cpt Ruben, his wife Louise and 2 kids Machiel and Anna. In exchange to participate at the pizza buffet, they were more than eager to play the role of ‘Uber Eat’ and at 4:15pm, they arrived with eight freshly made, warm pizzas at SY Blowing Bubbles. Several hungry stomachs awaiting them, the pizzas got sliced up and soon there was no more talking, just enjoyment as the pizzas made their way from box, via mouth to stomach.

The day came slowly to its end, while relaxing in the sun, having a drink and four young French sailors making plans to become certified NAUI Scuba Divers as soon as possible. Turning the last 24 hours from an intense situation to a relaxing dinner with friends, all was needed was some scuba diving! 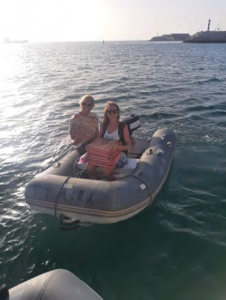 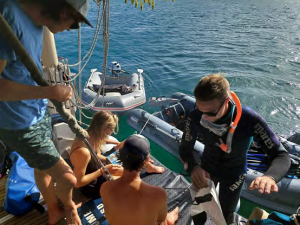