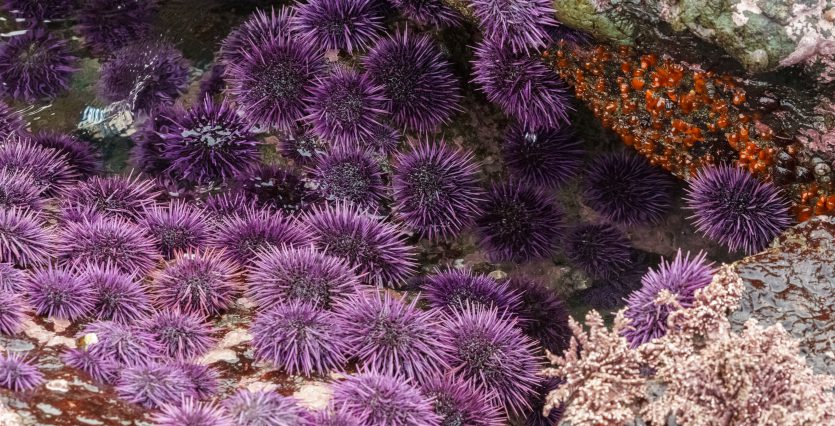 What follows is a description of an environmental emergency on the northern coast of California and a call-to-action to SCUBA and free divers that love this coast.  The need is urgent and time-sensitive – read on to see how you can help.

The north coast of California has experienced a massive disturbance in its near-shore ecology.  Nearly one-third of the California coastline’s near-shore kelp ecosystem has been devastated.  The kelp forests and the algal understory on the reefs of this expansive and diverse ecosystem have been reduced by over 95%.  This once lush and productive underwater environment has now been replaced by a barren underwater wasteland. 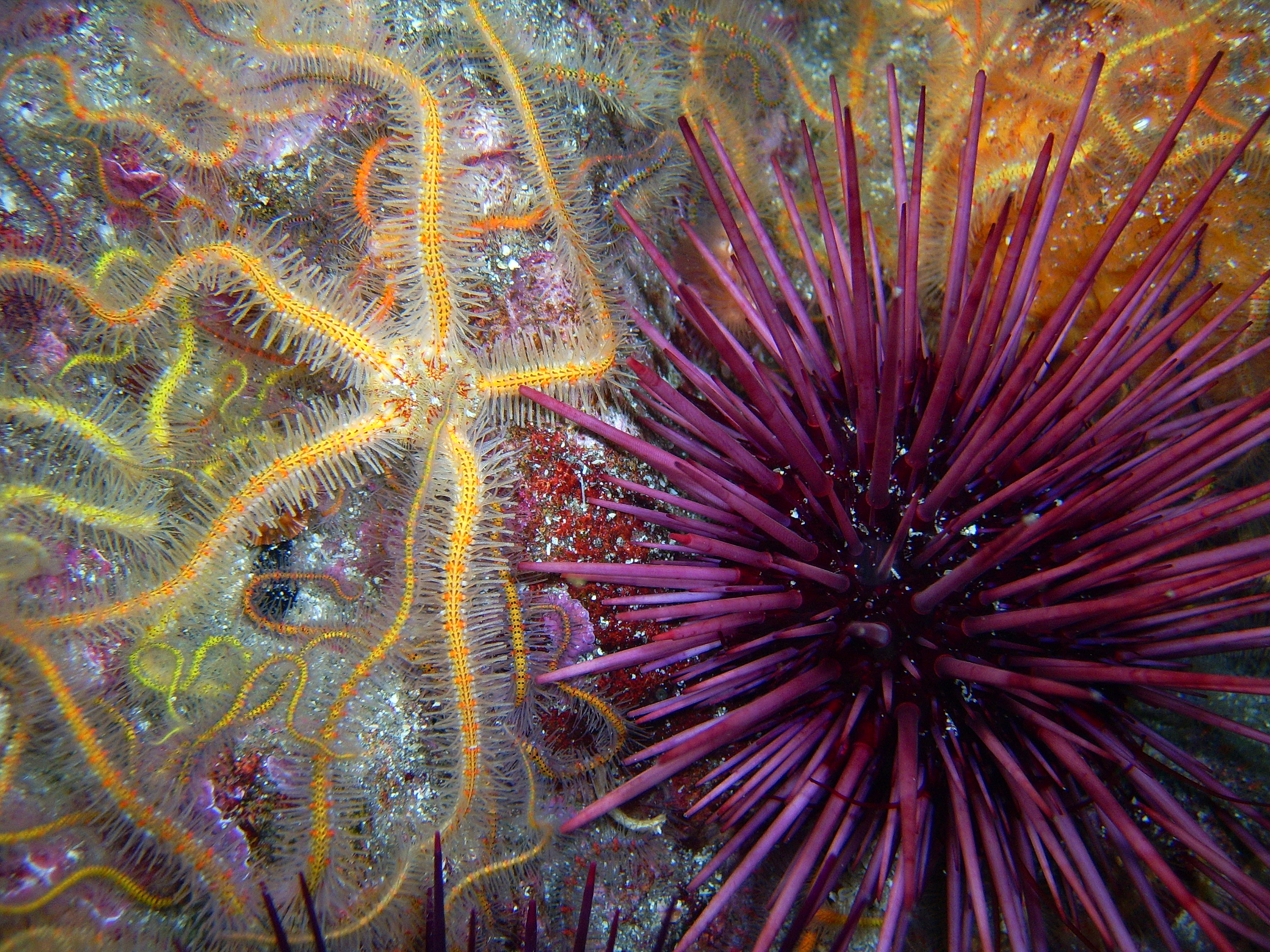 And all the species that rely on the kelp and other algal species for food, cover, and breeding have suffered massive declines in their populations as a result.

The source of this destruction can be traced to a densovirus, made more virulent by warm ocean waters, that struck ~ 2013 and nearly wiped-out the starfish and sea star populations along the North American Pacific coast.  The sunflower sea star (pycnopodia helianthoides) was hit particularly hard by the virus and is now believed to be nearly extirpated from the California coastline.  In northern California, the pycnopodia was the main predator of the purple urchin.   And with that predator gone, the purple sea urchin population exploded to over 60 times their historical densities.

The purple urchins then picked the reefs of the north coast nearly clean of all algal species.  What then followed was a massive die-off of all the species in the area that rely on the kelp for food and cover. “Our beautiful northern California coast is now a shocking and heartbreaking desert of death with the last remnants of abalone and kelp barely hanging on to life” is how Pat Foley, a second-generation and life-long abalone and SCUBA diver on the North Coast, describes the situation.

The Red Abalone – a species that has supported a recreational fishery and the coastal economy for decades has been decimated so badly that the season has been closed until at least 2021.   Millions of abalone have starved to death due to lack of their main food source – algae.   According to Tristan McHugh, Northern California Regional Manager for Reef Check: “Abalone populations in Sonoma and Mendocino counties have plummeted following the multiple biological and environmental stressors that began around 2013.” 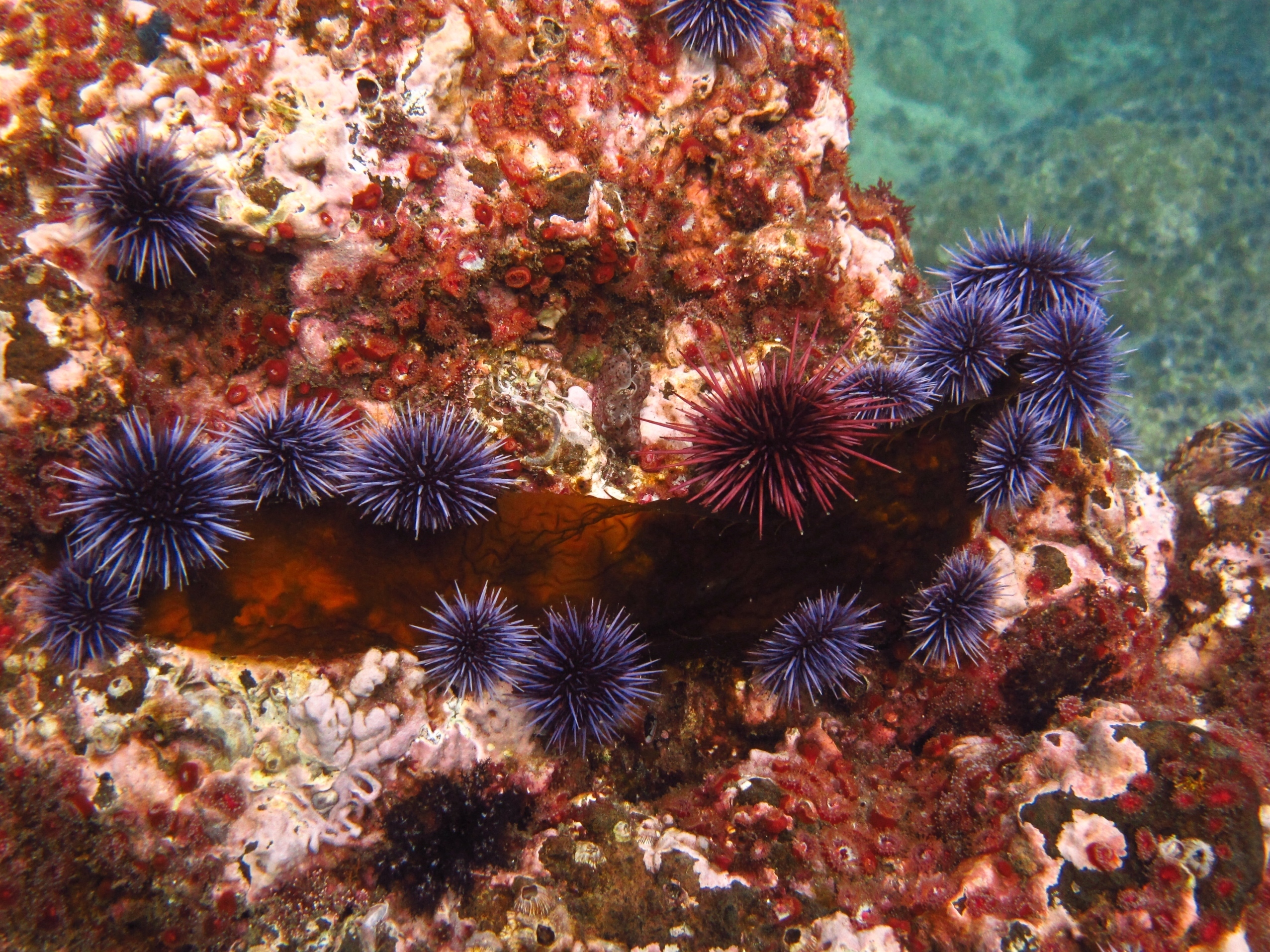 The red urchin has also been outcompeted by the swarms of purple urchins.  Their numbers have dropped precipitously.  This has devastated a once vibrant commercial urchin fishery on the North Coast. In fact, all species that require kelp for their existence have suffered.   Fish populations have fallen to the point where charter boats are staying in port at Fort Bragg due to the lack of any available fish to catch.  Sea bird populations have also seen drastic declines.

For more information on how to assist – please check out our Facebook page:  Watermen’s Alliance Urchin Removal Effort.

The areas where purples take over and dominate the local marine environment are called “urchin barrens”.   These barrens occur naturally but are usually small in area.  They are particularly persistent due to the purple urchins’ amazing adaptability.   Purple urchins can live to well over 70 years of age.  Secondly, they have the ability to go into a state of hibernation when their food source is low and can thus stave off starvation for an extended period of time.   Lastly, in this state, they become very resistant to predation due to the fact that they are lacking (or are very low on) their gonads – or “uni” – and are thus unappealing to predators.   What we now have in the North Coast of California is, essentially an urchin barren that runs throughout the entire coastline of the four northern counties of California.

While the area most affected by the explosion of the purple urchins is currently in Northern California, there is reason for every diver that enjoys, or desires to enjoy, the beauty of the California waters to be concerned.   These urchin barrens are not only affecting the northern coast.  They are starting to be reported further south as well – including the rich, diverse and extremely important ecosystems of Monterey Bay and the Channel Islands.  Undoubtedly, this problem will expand if not addressed.

But what can be done?   Work in Australia and other places abroad have shown that divers can mitigate, and even reverse, an urchin barren once it has arisen.   A Feb 2020 paper in Frontiers in Marine Science found “that urchin removal can facilitate natural recovery of kelp and other macroalgae on Australian temperate reefs when healthy kelp forests are nearby the denuded area” (Layton et al., 2020).  So, activities that remove or cull urchins to clear out space for new kelp, while preserving existing kelp, are a crucial part of any recovery effort.   Now we need to prove that similar efforts can be successful here in California as well.

The Watermen’s Alliance has been working diligently over the last several years to allow a response on the North Coast by concerned divers.   They have worked to lobby the government to accommodate a more vigorous response to the crisis.   This includes successfully getting the California Department of Fish and Wildlife (CA DFW) to raise recreational bag limits on the purple urchins in Sonoma and Mendocino counties to allow divers to enter the water and remove urchins.  This has been slow and tedious work but they have organized numerous events over the last two years to address the problem.  But what is really needed now to effectively manage the situation is employing the underwater culling process that has been so successful in other areas.

In 2020, the Watermen’s Alliance has convinced the CA DFW to implement an emergency regulation allowing recreational divers to engage in underwater culling of purple urchins in Caspar Cove.   This emergency regulation took effect 02 March 2020 and runs initially for only six months – with two potential 3-month extensions.  During this effort, divers must voluntarily follow protocol and reporting requirements established by scientists from Reef Check to monitor the progress of the culling effort and any subsequent reef recovery.   If divers do not follow protocol or report the data needed, the regulation will be reversed. We are only being allowed to do this as part of a scientific project.

Now, for the call-to-action, Joshua Russo President of the Watermen’s Alliance sums it best by saying: “We have limited time to make a difference here.  The emergency regulation remains in effect for a maximum of one year. Our challenge is to prove to the CA DFW that recreational divers can make a difference in reversing an urchin barren to allow the reef to return to a balanced state.  If we fail, we may never be given this opportunity again. Therefore, the Watermen’s Alliance is asking for all divers who love the California ocean to dive Caspar Cove as many times as possible, follow the voluntary protocol, and help promote this program in any way you can.”

We hope to see you in the water!   For more information on how to assist – please check out our Facebook page:  Watermen’s Alliance Urchin Removal Effort.