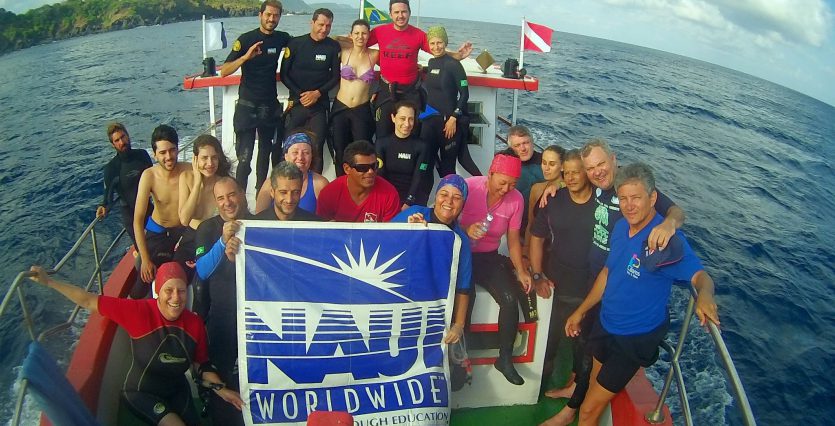 The largest of an archipelago of 21 volcanic islands and islets, Fernando de Noronha is the pinnacle of an extinct volcano whose base is 2,480 feet (756 meters) deep. Located about 215 miles (340 kilometers) away from the mainland, it is considered one of the best diving destinations in South America.

The first visitor was the Portuguese navigator Amerigo Vespucci in the year 1503, shortly after the discovery of Brazil. Fernando de Noronha remained isolated and little used for several centuries. In the 19th and 20th centuries, it was used as a prison, and during World War II, an airport was built and used by the United States military. The island and the seas around it were made a national marine park in 1988, and it was designated a United Nations Educational, Scientific and Cultural Organization (UNESCO) World Heritage Site in 2001. The last 20 years have seen a large growth in the number of visitors.

Only the main island is inhabited and has a fixed population of about 3,000 people. Tourism is developed in a sustainable manner, mainly due to the existence of the national park, which occupies two-thirds of the total area of the archipelago.

Visibility that can reach easily reach 150 feet (50 meters) and a water temperature of 80 degrees Fahrenheit (27 degrees Celsius) provide ideal conditions for diving — one of the main tourist activities on the island. A great diversity of fauna provides unforgettable encounters for divers: lobsters, turtles, morays, stingrays, some species of sharks, big fish and numerous shoals of reef fish.

Due to environmental requirements, only three dive operators are installed on the island; two of them are affiliated with NAUI. More than 20 dive sites with depths that can reach 200 feet (60 meters) can be visited by divers.

One of the main dive sites is the wreck of the Brazilian Navy’s corvette Ipiranga, which sank in 1984 after a collision with a rock. It sits upright in navigation position, as if still out of the water, two miles (three kilometers) from the shore. It is a technical dive, with depth between 175 and 200 feet (54 and 62 meters). The well-preserved Ipiranga has an imposing cannon on the stern, and almost all the structures remain intact (except the machine guns, which were salvaged by the Navy). Inside are all the accessories and gear that were abandoned by the crew during the sinking. The local dive operators provide trimix for diving the Ipiranga.

NAUI Services Brazil can give you full information and all the tips for diving in Fernando de Noronha. Call the service center at 55-11-4497-0031 or send an email to naui@naui.com.br, and plan your trip to Brazil’s island paradise.