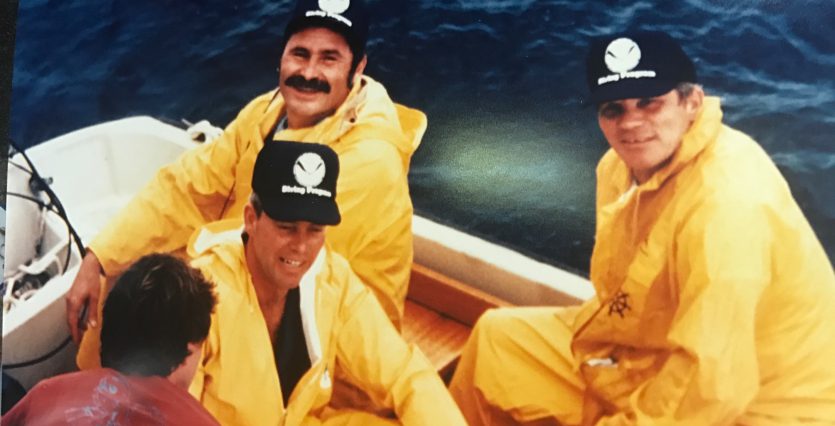 From the time he began diving in 1955 to the science diving projects he continued to work on well into his retirement from the National Oceanic and Atmospheric Administration (NOAA) in 1995, Dr. Wells was a pioneer and leader in every sense of the word. Throughout his career, the many titles he held included that of aquanaut, engineer, marine biologist, professor and physiologist, just to name a few.

‘Dr. Wells worked tirelessly to improve the dive industry and efforts of NAUI. His contributions to NAUI Worldwide were significant, as was his commitment to expanding the science of diving and the industry as a whole,’ said NAUI Executive Director Dallas Edmiston.

After earning his B.S. in 1962 from Randolph-Macon College, Dr. J. Morgan Wells received scientific diving training at the Scripps Institution of Oceanography (University of California, San Diego). At Scripps, Dr. Wells earned his Ph.D. in physiology/marine biology for his thesis entitled Pressure and Hemoglobin Oxygenation.

In 1965, he became a U.S. Navy SeaLab II Aquanaut as part of the ‘Man-in-the-Sea’ program and received mixed-gas and rebreather training from the U.S. Navy Mine Defense Lab. For more than 23 years, Dr. Wells was employed by NOAA, serving as science coordinator for the Manned Undersea Science and Technology Office.

He was appointed director of the NOAA Diving Program in 1978, teaching advanced training courses in hyperbaric medicine after recognizing that physicians had little training. In 1989, Dr. Wells achiev

According to Dr. Wells, ‘Mother Nature provided the planet Earth with a Nitrox atmosphere known as air. She never said it was the best breathing medium for divers.’ Because he saw the need for longer periods of diving time, with less decompression time, he went on to develop an EAD (Equivalent Air Depth) formula in 1970 and used this formula, along with the current tables, to develop the nitrox dive standards known as NOAA Nitrox I (1978) and NOAA Nitrox II (1990). This allowed NAUI to become the first recreational agency to adopt the standards (in 1992) and offer nitrox certifications to recreational divers.

In retirement, Dr. Wells worked with the Undersea Research Foundation, which he co-founded with Jim Devereaux and Charlie Depping. The Foundation developed BAYLAB, a research facility designed to educate people about the underwater ecology of the Chesapeake Bay, and created the Chesapeake Bay Underwater Video Library.

For his remarkable work and a lifetime of studying and promoting diver education and safety, Dr. Wells earned NAUI’s Leonard Greenstone Diving Safety Award in 1993. Other notable awards received by Dr. Wells included the U.S. Navy Meritorious Public Service Citation (for actions during SeaLab), the Society of American Military Engineers Colbert Medal (for contributions to contaminated water diving), and the Underwater Society of America NOGI Award (for diving education). In 2016, alongside Dick Rutkowski, it was NAUI’s privilege to induct J. Morgan Wells into the NAUI Hall of Honor in recognition of his lifelong commitment and dedication.

Sadly, we have lost Dr. Morgan Wells, a long-time colleague and personal friend. His loss is felt across both the scientific community as well as the dive industry. Morgan’s accomplishments are many, and we were fortunate enough to have worked with him on projects all over the world in our time at NOAA. Then, we collaborated on many projects together over the years ranging from Nitrox to Hyperbarics and more. His knowledge and his willingness to problem-solve will be greatly missed. Smooth seas, Dr. Morgan

The Association would like to offer its sincerest condolences and appreciation for the life and career of Dr. J. Morgan Wells, a true diving pioneer and legend.