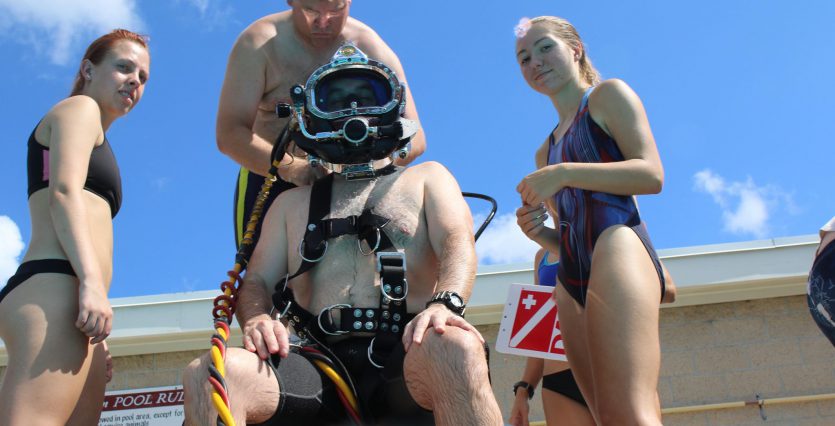 The Galveston campus of Texas A&M University (TAMUG) is a premier institution for maritime leadership and ocean and coastal studies on the Gulf Coast and a 21st-century institution where research and scholarship are one with student learning and success. This campus operates a recreational and scientific diving program that has been well established since 1998. The university was a founding member of the American Academy of Underwater Sciences and introduced a minor in diving technology and methods in 2014, making the campus one of the few in the nation to formalize scuba education into an academic program.

Between 2012 and 2016, the recreational dive program enrollment increased by over 134 percent, while the school’s undergraduate enrollment increased by 20 percent. In order to better understand the value and impact of the scuba program, we used enrollment in Scuba II (advanced and Nitrox certifications) course to compare the diversity (in gender and ethnicity) of scuba students to the university average. This course was chosen for the comparison because this seems to be the point where students start to incorporate scuba into their personal identity. In the spring semester of 2016, Scuba II enrollment was 50 percent female while the university enrollment was 37 percent female. Students from underrepresented ethnic populations made up 34 percent of Scuba II enrollment, compared to 24 percent of the university. We also compared the average GPA and total course load of Scuba II students to the university average and found that students in this Scuba II course were enrolled in 1.4 more credit hours and had 0.13 higher points in their average GPA. We found these trends to be similar across the previous three semesters. The conclusion is that the courses and culture developed within the TAMUG scuba program have resulted in high-impact learning and increased inclusion.

As a leader in our dive program at TAMUG, I often consider the importance of evaluating the culture that we are developing. This calls to mind the commencement address of David Foster Wallace and the fish story he told to express that “the most obvious, important realities are often the ones that are hardest to see and talk about.” In his analogy, the water represents the culture that we live in, and sometimes it is difficult to evaluate or change the culture because we are all so accustomed to existing and working in it. A great privilege of teaching in higher education is

the opportunity to analyze the learning environment we are creating and some of the current major topics of discussion involve student success rates, transformational learning, inclusion, and appreciation of diversity.

Through a survey of TAMUG alumni, it was identified that a large percentage of the university’s former students were positively impacted by participation in extracurricular experiences. Specifically, 77 percent of the respondents stated that they had belonged to a student organization while enrolled. The survey also reported that 82 percent of respondents would attend TAMUG if they had to do it all over again. These results indicate that the opportunities for leadership development and involvement outside of the classroom are important for college-age students’ satisfaction.

In 2014, the TAMUG dive program created the Scuba Educational Adventures Living Learning Community (S.E.A. LLC), which allowed incoming freshmen to apply to be a part of a small cohort of students that would live together in a specific dorm and share a similar interest in diving. This student organization is now completing its third year and is active in fundraising, service projects and diving activities. In 2017, we administered an anonymous survey and asked them what they enjoyed most about the S.E.A. LLC. We then took those words and created a word cloud (in the shape of an Aggie thumbs-up!) to have a visual display of the impact of the organization. This has been a helpful tool for us in marketing the dive program and the S.E.A. LLC, and it has helped the dive faculty to easily keep in sight and mind the kind of culture we want to continue to foster.

Several reports, such as the “2017 Physical Activity Report,” indicate that Americans are seeking nonconventional exercise outlets that have a clear mental or emotional “takeaway,” in addition to health benefits. People of all ages are looking for activities that foster an inclusive community, as well as a fun experience. Participation in activities such as CrossFit and triathlons have increased in the past few years in the United States, and these organizations appear to be successful in creating an atmosphere in which everyone is welcomed and encouraged to try new things. Anecdotally, based on several years of working with college-age students, I think young people are looking for ways to connect their community, hobbies, and health. This is an opportunity for leaders and role models in the scuba industry to take some time to consider the water (culture) we are living in and make sure it’s appealing to the young fish that follow us.