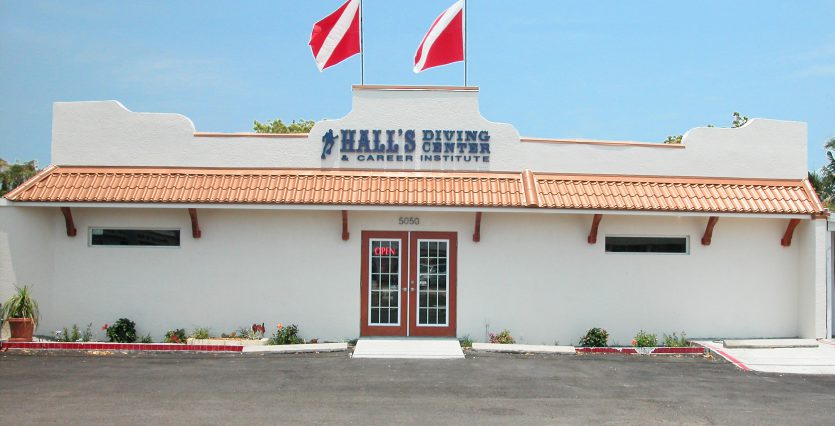 Livin’ the Dream in a Tropical Paradise

The tropical breeze gently rustles your hair and makes that unmistakable sound as it tosses the palm fronds to and fro. As you walk along the path to dinner, the sun is getting low and its golden orange glow bounces playfully off the orange-peel calm water nearby. As you go you recall the great dives you did earlier — the great wreck you explored, the colorful schools of reef fish, awesome. Your flip-flops clip-clop to the beat of the cheerful music emanating from the dockside bar as you get nearer. You take a deep breath of the moist tropical air and smell today’s catch on the grill, and you can practically taste that cold beer that awaits you. Various groups of people are gathered laughing and talking about their day’s diving and fishing adventures out on the water. You spot your friends perched on their favorite bar stools with the perfect view of the sunset and the boats lazily plying the marina’s waters. A round of smiles greets you and someone presses a cold beer into your hand. Plain and simple, you’re living the dream in a tropical paradise.

Of course, that’s the dream all ocean-going, dive-loving folks have. To live and work in a tropical paradise, diving great reefs, meeting fascinating people, and relaxing at the end of the day while overlooking the water. It’s the alluring call of the dive life. Many of us only experience it from time to time when we travel, but there are also many who live it, make a life of it. The best part of it is, this could be you, and you don’t even have to travel to some far off land to experience it.

Stretching 120 miles (190 kilometers) southwest from the tip of Florida, the Florida Keys have a laid back charm all their own. The Overseas Highway, in a former life an old railway line that ran all the way to Key West, connects these dots of green oases with picturesque spans. As you make your way southwest along Highway 1, as it’s also known, the mile markers count their way down. By the time you make it to mile marker one and Key West, it feels like you’ve been transported into another era with its quirky Victorian architecture and island-style all its own. But, halfway down the keys, anchoring the middle of this emerald island chain is Marathon Key. It got its name from the railway workers who built the old line and complained that the project was a real marathon. The railway station was named as such, and though that’s now long gone, the name stuck.

In search of exactly this kind of island lifestyle, Bob Brayman (NAUI 6058) made his way to mile marker 50 back in 1973. He was already an established instructor trainer with retail experience, but he wanted to start something special in the Florida Keys. He stumbled upon a closed down dive shop that needed his help. He partnered with the old owner, and with some ingenuity, sales gumption, and grit, he got the shop back up and running in relatively short order. What it would become is a lot more than just a dive shop.

Bob knew what it took to be a successful instructor. He also knew what it took to run a retail dive operation. What he wanted was to create a “university” for people who wanted to join the industry full time. “Most dive instructors find part-time employment at best,” says Bob. “What I wanted to do was to give people the skills they would need to be able to make a good, full-time living in the dive industry. You can’t just train divers and be financially successful. You have to sell them gear and keep them diving. When I started this, there were a lot of dive instructors that actually thought selling gear to their students was unethical because they were using their influence over their students to do it. Without sales, you can’t make a decent wage. The biggest part of the market is the dive shop or resort operations.” In addition to the regular set of instructor skills, the International Diving Career Institute at Hall’s Diving Center started teaching people how to actually live the dive life.

It’s set at the heart of the Florida Keys has been a big part of its success. Just as Bob was lured to the tropical paradise (with all of the conveniences of being in the U.S.), so are throngs of students. Not only do they train to become instructors, but they live there and work at the shop. They’re immersed in the dive life and well-schooled on every aspect of it. His graduates are always asked where they were trained because wherever they go, they quickly shine as the MVPs of their dive operations. Why? Because they have retail experience, they can captain a dive vessel, they can repair scuba gear, they can do just about anything a professional dive operation could want. Hall’s students are in high demand. If someone is serious about working full time in the industry, Hall’s is the place to learn how.

Hall’s Diving Center didn’t start as a NAUI shop. In the early days, Bob was getting tired of the “ruthless” business practices of some of the other training agencies. He needed a change. NAUI had been described to him as the “white hats of the industry,” so he approached NAUI Executive Director Marshall McNott and crossed over. NAUI’s commitment to the highest quality dive instruction was a perfect fit for the way Bob teaches his students, but the crossover wasn’t without a couple of bumps in the road. “There were a lot of very ethical, long-time members of NAUI,” says Bob, “that didn’t trust an outsider coming in and running a NAUI Professional Development Center without an established NAUI track record.” As a result Hall’s hired five different well-respected Course Directors over a year and a half to come down and audit his professional development courses. Each and every one of them left fully satisfied that Bob’s students were getting a top-notch NAUI education. Neither Bob nor NAUI has ever looked back.

Hall’s courses are also configured for people really making a commitment. They offer Short Residence Honor Programs that run between 4 and 19 days, and Full Residence Professional Career Programs that run between 6 and 14 weeks. The 14-week course is the Professional Store and Resort Instructor with Deep Tech and Rebreather Instructor Training Program.

Attending most of these programs means living in the area for at least a short while. Since hotels in the area are expensive, Hall’s offers dormitory accommodations to their students for a mere $24 per night. The dormitory is just a short walk from the dive center and, of course, the diving.

Let’s not forget that training, working, and socializing in a tropical paradise has another benefit as well — great diving! Hall’s students are out on the boats pretty much every day working and training with real students. But the best of it is that they’re diving fantastic sites like the wreck of the Thunderbolt, a 188-foot (57-meter) cable-laying ship that sits upright in 115 feet (35 meters) of water, or the barge wreck in 35 feet (11 meters) of water that’s covered in schools of fish so dense that you literally have to part them with your hands. There’s also a plethora of relatively shallow reefs like Delta Shoals, Coffin Patch and Sombrero Reef that are covered in reef fish, nurse sharks, barracuda, turtles and more.

It’s no wonder Hall’s International Diving Career Institute has been in business for 44 years and counting. They truly are a university for dive professionals, but that’s only half the draw. The other half follows the most important rule in real estate: location, location, location. So the next time you feel trapped in your little cubicle, making your eyes go bad staring at a computer monitor under the sickly glow of fluorescent lighting all day, see what a one-way ticket to Miami costs. Pick up your rental convertible when you get there, and start counting down the mile markers to 50.