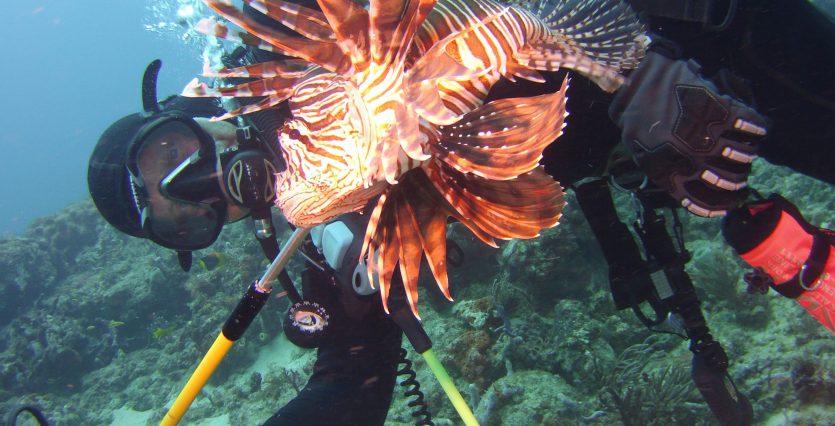 Diving in the Philippines years ago, I photographed what they called “turkeyfish.” They were the only species of fish in abundance in some places. The beautiful fish remained perfectly still suspended in the water column, brightly colored red and white spines deployed, large mouths poised to devour prey.

We call them lionfish. Exotic and beautiful fish to behold, they once became aquarists’ dream fish in the U.S., decorating saltwater tanks with resplendent beauty. Their popularity waned when admirers found they had voracious appetites and quickly devoured other small tropicals in the tanks with them. Not wanting to kill their magnificent fish, aquarium owners dumped them into the Atlantic Ocean. Some have blamed Hurricane Andrew for releasing them into the wild, but the first lionfish was sighted in Florida waters in 1985, seven years before Andrew hit. Some postulate that oceangoing ships from the Pacific Ocean released them when they emptied water from ballast tanks.

Whatever the origins of the first lionfish invasion, they have proliferated as an invasive species, ranging from Cape Hatteras south, into the Gulf of Mexico to Texas, and throughout the Caribbean. They continue to menace other tropical reef fish. Not a particularly large species, lionfish adults can be a half meter (18 inches) long and weigh 1.5 kilograms (3 pounds). They can live for some 15 years, and they are without natural predators. Females reproduce every month releasing upwards of 15,000 eggs.

In the Philippines, I found turkeyfish to be aggressive. When I would approach to take a photograph, they would aim their venomous spines at me and prepare for an attack. Their exotic coloration of bright red, brown and white warns predators to stay clear, and their feathery spines contain a dangerous toxin concealed inside colorful sheaths. Lonfish are not only exotic, they are dangerous.

Stings from the spines cause immediate pain and swelling. The venom is thermolabile and breaks down under extreme heat. Divers who have been stung are told to immerse their hands in hot water (50 degrees Celsius/120 degrees Fahrenheit) to break down the poison. The usual sting-relief options such as vinegar do not work on lionfish stings.

Look but don’t touch is the key. Divers are stung most often while spearing lionfish then accidentally coming in contact with their spines.

In attempts to reduce the impact of lionfish, Florida Keys Marine Sanctuary officials have permitted harvesting them within sanctuary boundaries. Elsewhere in Florida, there are organized efforts to reduce lionfish populations with lionfish derbies or contests with prizes for the largest catch.

While there are no natural predators on lionfish in the Atlantic, divers spearing them have begun to get sharks, groupers and moray eels to eat them. The hope is to get them to eat lionfish on their own. In some cases, divers cut the spines off before offering them to the reluctant predators.

Capt. Jason Adams, operations manager of Key Dives in Islamorada, Florida, takes a trident pole-spear with him on every dive. He encourages the divers he takes underwater to spot lionfish for him. Key Dives has permits from NOAA and the Keys Marine Sanctuary to spear lionfish in areas where no harvesting of anything is allowed.

Under pressure from spear fishers, lionfish have become wary. Once easy shots are no longer always so: the fish tend to flee in popular dive sites when they sense divers’ bubbles.

When Adams speared a lionfish that sought refuge under a coral head a small nurse shark appeared. He did not use shears to cut off its spines. He wears special Teflon gloves that do not allow spines to penetrate. The nurse shark is now trained to eat lionfish. It took the speared fish and swam away. Another speared lionfish was offered to a green moray eel, which came out of its niche and grabbed the lionfish off the spear.

It was in the early 1990s that a friend told me he photographed a lionfish off Delray Beach. I was enthused by the prospect of photographing it, received a good description of the location, went back underwater and took the picture. That was my first. Lionfish with their colorful spines deployed continue to be a favorite photographic subject.

Lionfish flesh, once spines have been cut off and filets made, is white and among the best tasting fish to be had. Prices in markets offer lionfish from $7.99 a pound and more. Restaurants have begun featuring lionfish on menus. Since the fish are relatively small it can take a lot of fillets to create a pound. Spear fishing for lionfish is still a cottage industry in Florida. Hopefully, the dedication of divers from Key Dives, other dive operators, and private spear fishing enthusiasts can begin to control the population in specific areas. However, because of their rate of reproduction, large geographic range, and the depths to which they are found, NOAA says that complete control or elimination is all but impossible.

We can continue thinning their population, and divers are doing their part. Slowly popularization of lionfish as food is gaining acceptance as a delicacy, the harvest is growing, and we are achieving control in some places.