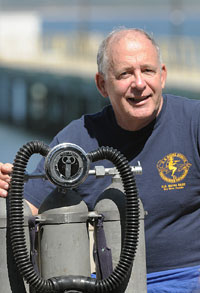 NAUI Instructor Honored as Beneath The Sea Diver of the Year

NAUI Instructor Honored as Beneath The Sea Diver of the Year

Tampa, Fla., (February 28, 2017) – The National Association of Underwater Instructors (NAUI Worldwide) is excited to announce Bernie Campoli, NAUI Instructor ,1900, of Panama City Beach, Florida, as one of the Beneath The Sea Divers of the Year for Service.

According to Beneath The Sea, its Diver of the Year Award program has honored individuals whose presence in the dive industry has made significant and lasting contributions to the past, present, and future of diving.

‘By selecting for honor only those divers of eminence who rank in the top of their field…, Beneath the Sea has created a fraternity of men and women whose visions are firmly fixed on the future of diving and whose future is tied to each other and to divers everywhere,’ as specified by its recent release.

For over six decades, Campoli has been a recognized photographer of recreational, commercial and military diving. Campoli’s first published photo appeared in a 1955 issue of Skin Diver magazine over a half-century ago. His footage continues to be used on Discovery, National Geographic Society, ABC, Learning Channel, History and Military channels, and featured motion pictures, according to the Academy of Underwater & Sciences.

Campoli’s images of military diving have appeared in the U.S. Navy Dive Manual, All Hands Magazine, Naval Institute Proceedings, and the 2008 historical compendium Naval Forces Under the Sea, Volumes 1 and 2. Campoli is a Lifetime Member of the National UDT-SEAL Museum and the UDT-SEAL Association, an associate member of the Boston Sea Rovers, and has been a member of NAUI Worldwide since 1970. Campoli is also a Hall of Honor member for the Northwest Diving History Association.

To kick off Beneath the Sea’s consumer show, scheduled March 24 through the 26th, NAUI leaders will be presenting at the Marine Careers Program Friday, March 24 from 9 a.m. to 5 p.m. Then, on Saturday and Sunday, audiences can expect presentations on topics that include building confidence through integrated scuba training, rebreather technology, shipwrecks, continuing education through dive travel, and youth engagement in diving. Event and presenter information can be found at https://www.naui.org/events/beneath-the-sea/.

Visit here to read more about the Beneath the Sea Divers of the Year 2017.