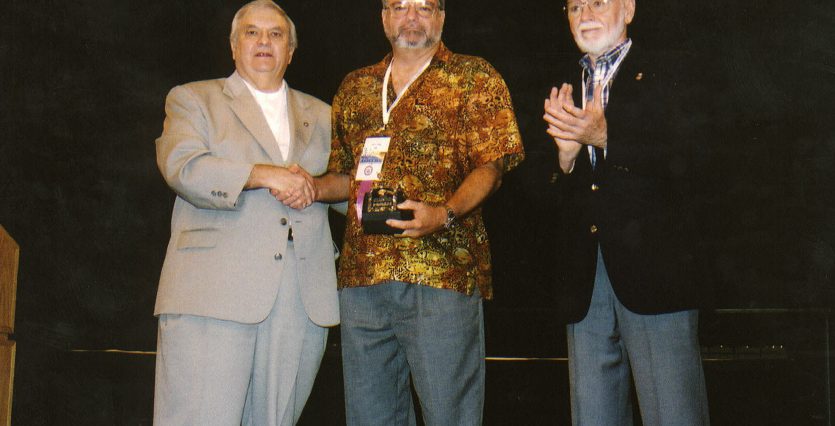 Keeping divers warm at any depth — you could say that has been Dick Long’s life accomplishment, and you’d be right. But, there’s a whole lot more to Long than “just” keeping divers warm. If you have the chance to sit down and talk with him, you’ll quickly see that he’s not only capable of engineering solutions to any underwater problem that’s been thrown at him over his lengthy career, but he has a much bigger mission in life. He’s an ocean evangelist, and he wants you to become one too.

Long was born in Oakland, California, in 1937. At the age of 16, he dropped out of school and joined the Army. After the service, he moved back to California in 1958 where he remembers taking walks on the beach and feeling like something was calling him. It wasn’t long before some friends introduced him to snorkeling in Monterey. He was instantly smitten. He not only got into scuba diving, but he also became involved in teaching. At the time there weren’t formal dive classes; diving was taught through local clubs and was very bare-bones. As diving’s popularity started to grow, more and more accidents occurred as a result of lack of training. Long and others felt that something needed to be done as quickly as possible. In 1960, he was invited to be a member of the very first NAUI Instructor class. He drove all day and night from California to Houston to participate in the course, and as you can tell from his NAUI number, “49”, he’s a graduate of that first NAUI Instructor course.

When he returned to California, instructor card in hand, he got involved in the fledgling dive industry right away. He helped open up a dive shop in San Jose. Then in 1963, he decided to move to San Diego where the water was warmer and there was better lobstering. That’s when he opened his own dive store, Skin Diving Unlimited. While the water may have been warmer than up north, it still wasn’t warm enough to keep tall, skinny Long from getting cold easily. So he embarked on a quest to make a better suit for himself. There he was on the kitchen floor with sheets of neoprene and black neoprene glue. There were no pre-made wetsuits at the time — you had to make your own from a kit. You can only imagine how upset Long’s wife was when he spilled the black wetsuit glue all over the kitchen floor! But, all of that early effort wasn’t wasted. He became quite good at making wetsuits, then began making them for others.

Long learned the key to making a wetsuit fit right was getting accurate measurements. His reputation as a wetsuit maker got him to work making suits for the U.S. Navy’s Underwater Demolition Team (UDT), which trained in San Diego. The UDT was the predecessor to the Navy SEALs. Long’s connection with the UDT got him an introduction to the Navy’s SEALAB II and III projects. “The biggest problem they had,” said Long, “was divers getting cold.” This was the beginning of a successful relationship where Long solved many engineering problems that perplexed the Navy.

“When they would ask me, ‘You can do that?’ I’d answer, ‘Of course … what is it?’” Long recalled with a smile. He became the Navy’s go-to guy for solving underwater challenges, like divers getting cold. At the time, the Navy was experimenting with different kinds of heated wetsuits. One of them was electrically heated, the other, well … the military was in the midst of the Cold War and was rapidly producing nuclear weapons. A byproduct of this production was plutonium-238. The Atomic Energy Commission felt it would be good to demonstrate some positive uses for nuclear energy. Hence, the birth of the nuclear-powered wetsuit. This is no joke. They actually had a kilo of plutonium-238 stuffed into a canister the size of a Thermos through which they would pump water. Although the plutonium-238 was shielded, it still produced enough heat to make some hot water. Despite their best efforts, the nuclear suit was a big failure. Long’s solution to the cold was a generator that pumped hot water through a hose and distributed it through the wetsuit. He had solved the previously insurmountable problem of divers getting cold — now they could stay warm at any depth. It was at this point that Long renamed his company from Skin Diving Unlimited to Diving Unlimited.

Long started doing some contract diving for the Navy and then the oil industry. For this work, he developed his own drysuit. “While wetsuit measurements need to be very accurate, drysuits don’t need to be as specific,” said Long. Then the oil industry hit a bit of a slowdown and a lot of his contract work dried up. Long recalled walking around a very early DEMA show thinking to himself, “There’s a limit to wetsuit technology; drysuits could take us a lot further.” It was right then and there that he decided to start making drysuits out of fabric instead of foam rubber. It was this small revolution of an idea, to take drysuits from the commercial sector to recreational diving, that would transform his dive shop into what would become a $9 million-per-year company.

While many of the early designs were fabric, one of Diving Unlimited International’s (DUI) innovations was the use of crushed neoprene as a drysuit material. “I had invented crushed neoprene back when I was working with the Navy on swimmer delivery vehicles,” recalled Long. Foamed rubber was hard to control because of its changes in buoyancy, so Long experimented with neoprene, torturing it in dozens of different ways. One of those techniques involved hot water and a lot of pressure. What came out the other end was a flattened piece of neoprene that was leather tough. Years later his formula for crushing neoprene became the backbone of the legendary CF200 drysuit — an iconic suit that would become the Harley-Davidson of East Coast wreck divers. “This suit gives you a lower cost per hour of use over any other material on the market,” said Long, “This suit is tough.”

While the CF200 was innovative in its use of material, DUI has innovated dozens of more ideas over the years. Self-donning suits, cross-chest zippers, warm neck collars, and user-replaceable zip seals are just some of the no-nonsense solutions Long has incorporated into his product line. “While other companies are trying to make things cheaper all the time, we’re just trying to make things better,” said Long. Harkening back to Long’s early days of suit-heating innovation, one of DUI’s more recent innovations is its BlueHeat, electrically heated drysuit underwear — no radioactive isotope required.

While Long has been successful in the diving industry, that’s far from the only legacy he wants to leave behind. In fact, there’s a much bigger purpose that drives this man who has sat on dozens of boards of directors and advisors, has authored a library of training material, and has won dozens of awards, including the prestigious DEMA Reaching Out Award for lifetime achievement (that was in 2004!). What drives him more than anything else is to be a champion for the ocean. “I’m concerned about the ocean,” said Long. “It controls everything on the planet. Yet pollution, runoff, et cetera are poisoning it.” While at times he may sound like the harbinger of doom, he spreads a message of hope. “You see, diving is an art form. Divers are submerged in the ocean and surrounded by it. You can’t tell where your skin ends and the ocean begins. It’s the most intimate way mankind interacts with the ocean. Divers are the ocean’s best hope.”

“It’s the dive industry that supports these divers,” Long continued, “I can guarantee the ocean will be there 20 years from now and there will be divers in it. The industry that supports these divers will still be there too but will look different. When we train people in scuba, we make them into people who can use scuba. A true diver, on the other hand, lives the lifestyle and dives all the time. You can’t make non-divers understand the passion that true divers have.” His message is clear. As an industry, we must make more true divers. While Long is a champion for both the ocean and the dive industry, that doesn’t mean it’s come without any friction. At times he’s even been at odds with some at NAUI when he perceived what he felt was an attitude that said, “We teach, we don’t sell.” But Long believes that in order to keep creating true divers, you need to support them and get them committed to the sport. It’s necessary to sell them gear to keep them diving.

“We [as an industry] operate as hunter-gatherers, but we need to be farmers. We need to plant seeds. People will do for free what you can’t pay them to do if they’re doing it for a cause they believe in,” said Long. “Mankind has been on the Earth for thousands of years and has survived all kinds of catastrophes. Logic says we should have killed ourselves off by now. I think of the world as a huge clock that keeps almost perfect time. If you take one little gear out of the clock it may still work, but not quite as good. DUI is a tiny gear, and each one of us is a tiny tooth on that gear. What each one of us does is important. It counts. We matter. We as divers get to see things that less than a tenth of a percent of the population get to see. We don’t do it for money. We’re privileged to be able to do this.” Amen. Keep on spreading the good word, Dick Long.