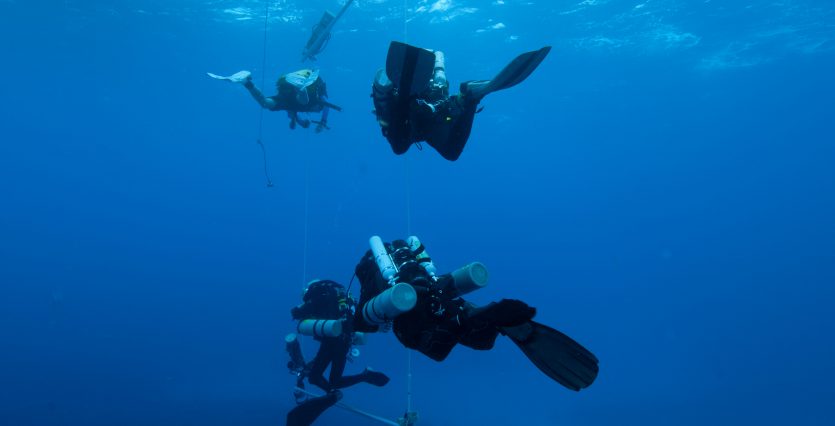 Rebreathers – An Evolutionary Branch in Diving

One of the questions that comes up with increasing frequency is whether closed-circuit rebreather diving will replace open-circuit diving. The simple answer is almost certainly not. This should not be taken as a negative view of the devices. Rebreathers are tools, and like all tools, they have strengths and weaknesses that vary with the application. The important thing is to know enough to understand the debate.

The humidified, warm gas breathed in a closed-circuit loop may not immediately seem to be important, but there is comfort to be gained in avoiding dry gas and in reducing thermal stress present to some degree in most of the waters we explore. This can be particularly important with long or repetitive dives.

The low gas use with rebreathers is a feature that grows in importance with depth. The ability to reuse gas instead of exhaling it to the environment can provide dramatic gains in efficiency. A secondary effect of this conservation is a reduction in bubbles, making it much quieter for the diver, and making the diver less disruptive to the local life and whatever structures would be struck by the bubbles. Animals are generally less skittish with rebreather divers, visibility in enclosed areas is preserved, and damage to sensitive structures is reduced.

Buoyancy control is more challenging with rebreathers. The diver cannot simply change lung volume for fine buoyancy control. The closed-circuit includes the diver’s lungs, tubing, and the breathing bags or counter lungs in the rebreather. Buoyancy is effectively unchanged by lung volume changes. Adjusting to this reality, rebreather divers tend to go around objects rather up or down relative to them to reduce the need to add gas to or dump it from the loop. Additional challenges do come in shallow water when the electronics prompt the automatic addition of oxygen to the loop at a high enough volume that gas dumping can be required. Since gas conservation is a major point of pride for many rebreather divers, this is indeed unwelcome. Another significant hazard for rebreather divers is the loss of buoyancy if the loop gas is lost. If the valve is not closed before the mouthpiece is removed, the loop volume and its positive buoyancy will be lost. The fact that closing a mouthpiece is more likely to be left out during distracting emergent events makes this a critical element for training.

The addition of oxygen was mentioned in the last section. In most of the rebreathers currently in use, sensors monitor the oxygen partial pressure (PO2) in the breathing loop and electronics trigger a solenoid valve to add oxygen into the loop when it falls below a setpoint (sometimes defined by the user and sometimes a defined by a system default). Engineering solutions are making the monitoring and regulation of PO2 reliable and robust, but the oxygen sensors are a notable weakness in the system. The biggest benefit of regulated PO2 for most diving is that it enables optimization of decompression. Unlike open-circuit systems in which PO2 falls steadily during the ascent as the ambient pressure falls, the PO2 can be maintained at high levels with rebreathers, thus improving the gradient for inert gas elimination. The setpoint is usually reduced in the shallowest reaches to eliminate the disruption to buoyancy discussed above, but thoughtful use can strike a balance to optimize safety and gas conservation.

The high purchase price of rebreathers is a barrier to participation. The cost is a huge factor if the comparison is to simple open-circuit systems. The difference becomes much less for divers considering open-circuit technical diving in which numerous cylinders, regulators, and other paraphernalia produce mounting costs. In such cases, the performance capabilities of a rebreather become much more attractive. In addition to equipment, the cost of gas is a consideration. If divers move into the realm of deeper diving with helium-based mixtures (heliox or trimix), the savings associated with gas recycling in a rebreather can be significant.

There are a greater number of significant hazards associated with rebreather diving than with uncomplicated open-circuit diving. Hypoxia, the condition of too little oxygen, can develop while breathing on a rebreather loop if it is not properly monitored. Hyperoxia, the condition of too much oxygen, can also occur through monitoring failures and/or equipment failures. We need adequate oxygen levels to maintain consciousness, but we need to avoid levels too high or risk life-threatening oxygen toxicity.

Hypercapnia, the condition of too much carbon dioxide, is the other critical hazard associated with rebreather systems. Operating properly, scrubber material removes carbon dioxide from the loop before the gas is re-inspired. While engineering solutions have reduced the risk, it is still possible to develop problems if a rebreather is dived without scrubber material, with an exhausted scrubber, with a partially bypassed scrubber, with a failure in devices controlling the direction of expired gas movement, or even with a high work rate.

Rebreathers can expand the diving range, but increasing depths increase the exposure to high gas density and breathing resistance. Additionally, while rebreathers can be used to optimize decompression, more extreme exposures can produce decompression obligations severe enough to create life-threatening conditions if decompression is missed. Physiological barriers to direct ascent make it critical for both diver and equipment to be fully prepared for the operation.

Reality and the Path Forward

The use of rebreathers has markedly increased in the past 20 years. While engineering and training solutions continue to reduce the risks, they remain substantial. Though activity data are limited, the life threat associated with rebreather diving is higher than for open-circuit diving. The use of rebreathers is almost certainly going to increase because of the inherent benefits, but the hazards must be respected.