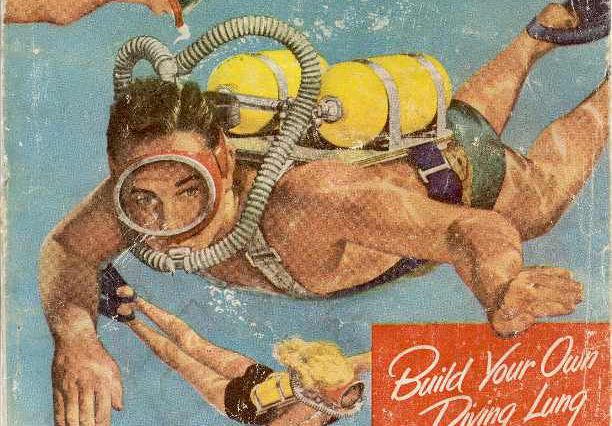 There is no doubt that diving has changed over the last several years. Computers that transmit and calculate all our information, regulators that will deliver an adequate amount of air at any depth, new materials for dry suits, stretchable wetsuits, more dependable rebreathers—so many other items have come out. It has only been in the last 25 years that recreational nitrox and recreational technical diving have existed. It is almost impossible to list all the changes in equipment, procedures, and skills. Recreational divers are going deeper, staying longer, and doing it with a high degree of safety.

When I think back on the archaic equi

pment and the information we did not know, it can get frightening. I had just begun diving when “Sea Hunt” had its first episode in 1958. The televised voyages of “The Undersea World of Jacques Cousteau” did not begin until ten years later. It was a time when humans were just beginning to really explore the underwater world and the wonders it held. Most divers at that time came from the military or were self-taught. Los Angeles County, California, had set up an instructor training course and then the YMCA. In 1960 NAUI held its first Instructor Certification Course in Houston, Texas. 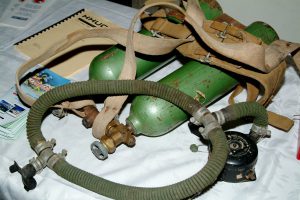 I remember the first time I went down in a mucky, cold lake. I could not see much as I breathed through the double-hose, unbalanced US Divers Mistral regulator. Without a wetsuit, I was cold instantly. The only guidance was from a pamphlet that said, “Don’t hold your breath.” I was miserably cold, blind, awkward, and frightened, and I instantly fell in love with it. It is a love affair that I have maintained ever since. I still find myself awed by the things I encounter underwater.

I did some recreational diving in Florida but did not really get a chance to dive on a regular basis until in the military I was shipped to Wheelus Air Base in Tripoli in 1964, was assigned to the Sea Survival School, and dove every day. US Divers was just coming out with their first balanced single hose regulator, called the Calypso after Cousteau’s boat.

Much of the gear we used was self-made. We would acquire all of the pinch-bottomed fire extinguishers we could from the base, take out the valve, clean the inside with caustic soda, neutralize that with vinegar, then baking soda, and then rinse it out. Friends at the machine shop made brass one-inch male to half-inch tapered pipe-stem female adapters (all valves were that tapered kind then). We would ratchet the adapter in with Teflon tape to seal it, insert the scuba pillar valve with more Teflon tape, and fill the cylinder to its 1800-psi capacity. Then we would take it out and lay it on the hot sand in the Libyan sun. If the cylinder did not burst, it passed our “hydro test.” We had government cylinders available for work, but we did not use them for recreation. Besides, they were all doubles.

We made wetsuit tops out of sheet neoprene. You lie down on a piece of butcher paper and have someone draw the outline of your upper torso, then cut to the pattern and glue the neoprene together. Most of the time, though, we used our government-issue wetsuits as they fit better and covered the whole body.

We made single-cylinder backpacks with an aluminum plate, stainless band material, and parachute harness. Buckles for this and for our weight belts were fashioned from brass rod.

We would fly to Italy periodically to get spearguns and lights made by Cressi and Mares. Cressi had just come out with a mask with a nosepiece sticking out for easy access. They called it the “Pinocchio” mask, and it allowed equalizing with one hand rather than two index fingers.

There were no submersible pressure gauges (SPGs) or BCs. We used underarm life preservers or May West vests, which inflated orally or with a CO2 cartridge and only worked for the surface. We had capillary depth gauges, compasses, USD dive lights, and knives.

The main cylinder valve at the time was the “J”-valve, which had a spring mechanism that allowed a 300 psi (or so) gas reserve. The spring remained compressed and held the valve open until less than about 300 psi remained, then it shut off. You pulled down a valve lever to reopen the orifice to allow the remaining air to be used. If the valve had been inadvertently pulled or bumped down prior to or during the dive, you had no reserve. You also had to make sure the J-valve was opened when filling or no air would flow into the cylinder.

Over the next several years, gear continued to be improved. The submersible pressure gauge (SPG) came out in 1969, thanks to ingenious cave divers who had waterproofed surface pressure gauges to work underwater.

A few years later the buoyancy compensator design came out, although you had to orally inflate them. The inflator’s large hose connected to the shoulder area to facilitate this. When someone came out with the idea of connecting an inflator to the regulator, a whole new approach to neutral buoyancy was created. With a few pushes on the inflator button, you could easily maintain neutral buoyancy throughout the dive. An overpressure valve prevented bursting, but you still had to vent air coming up to control your ascent rate.

In 1970, a decompression meter was brought out. (It became known as the “Bendomatic.”) The unit had two ceramic filters called “element X,” with an air bladder between them. Pressure on the air bladder caused the gas to pass though element X and move the needle to indicate decompression requirements. Unfortunately, it took 30 minutes to get into deco at 100 feet while the U.S. Navy dive tables said 25 minutes. There was also no real indication for repetitive dives although we played around with adding indelible marks on the scale to test it. I still have one of those Bendomatic relics somewhere.

By the mid-1970s improvements in regulators and BCs as well as more accurate depth gauges appeared. The alternate air source, affectionately called the “octopus,” was introduced (again from the caving community) for sharing air with another diver. It initially met resistance from some instructors (so had the low-pressure BC inflator: it was feared you might hit the wrong button and rocket to the surface), but eventually everyone had to admit the octopus was far safer and superior to buddy breathing — passing a single regulator second stage back and forth in a stressful situation.

Another major item that was introduced in the early 1970s was the aluminum cylinder. These were developed by Luxfer. The early design mimicked the standard steel cylinder in diameter and capacity (at 2475 psi) and was very buoyant. Divers had to carry extra lead weight to dive with one. Before long, higher pressure cylinders with better buoyancy were introduced, and the “Aluminum 80” became the common cylinder of choice. Luxfer’s cylinders were stamped SP6498, for Special Permit 6498, to indicate the Department of Transportation specifications for alloy and fabrication. This later became E6498, and in 1982 settled to 3AL for all manufacturers. Another big change was those very oldest cylinders used that 1/2-inch thread tapered valve stem wrapped with Teflon tape, while newer cylinders adopted the 3/4-inch straight thread with an O-ring seal.

In the 1980s, two more major additions to the diver’s gear list were electronic dive computers and nitrox. One of the first usable computers was the Orca EDGE, which appeared in 1983. It was all aluminum and about the size of a small brick with a small LCD screen. The EDGE used a modified Haldane algorithm and advertised multi-tissue monitoring. Another popular computer that appeared a few years later was their smaller Skinny-Dipper with an easy-to-read display (and a battery compartment that did not tend to leak). The diving community has always been conservative about changes and innovations, and dive computers were no exception. There was a lot of skepticism about them. But once they were proved and accepted, every manufacturer rushed to get into the computer game.

Not all manufacturers’ designs and decisions are good. Dacor, which was a major manufacturer for years, passed over a vented-fin design developed by Beauchat, a French company. But in 1965 Dick Bonin of Scubapro took the fin and introduced it to the U.S. market as the Scubapro Jet Fin. It is still produced today and is still the most popular fin design with technical divers. While the design did not propel you through the water as advertised, it did maintain the fin in a flat stable position allowing all the work effort to be used for thrust. A flat fin without vents wanted to tilt, causing a loss in thrust. Today, differences have been solved with exotic designs: split fins, ridged fins, etc., so now there is little real advantage to the vented over unvented fins, at least according to manufacturers’ claims.

The scuba world has spawned many evolutionary dead ends whose producers have gone extinct or been merged into other companies: the Healthways screw-in regulator that only fit their screw-in cylinder valve; the Watergill BC that self-inflated if the diver did not take a breath for a period of time. 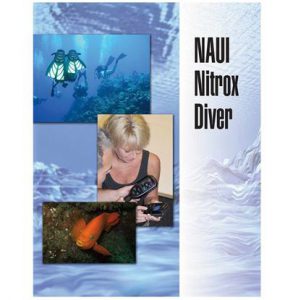 Nitrox was initially developed for open circuit scuba in the 1970s by Dr. Morgan Wells of NOAA to allow his research divers added dive time. In 1985, it was introduced to the recreational community by Dick Rutkowski, who had been NOAA’s chief of diving operations. Nitrox initially encountered a lot of resistance from manufacturers, who said their gear was not approved to use the higher-oxygen-content gas, and by training agencies, who declared it unsafe, too technical, and/or a voodoo gas. In the beginning, ANDI and IAND (new nitrox-specific training agencies) were the only ones who taught its use. In 1992, NAUI became the first general recreational agency to approve nitrox training. Over time, the other recreational training agencies came on board, and nitrox diving became a standard with everyone teaching and promoting it. Since nitrox has increased oxygen content, caution has to be exercised to avoid breathing too high partial pressure of oxygen, which can cause a convulsion. But the advantages of reduced nitrogen in the breathing medium are significant, and it is safe if used properly. 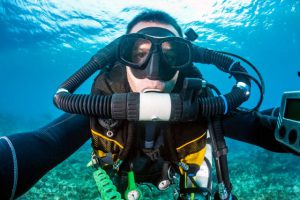 Rebreathers are expensive, and we are still in the beginnings of design for recreational use. But they are becoming popular, and they are being continually improved, and after diving with one, you will wonder why you ever did open circuit. Actually, it is only the recreational use of rebreathers that is new. The first scuba systems were rebreathers and were used extensively by both the Italians and British in both World Wars. 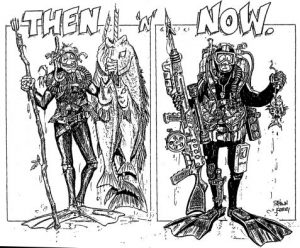 Diving equipment and techniques have changed a lot since my first plunge into the underwater realm. I am still looking forward to many more experiences wherever in the world I get to go. I know I cannot die yet as I have trips scheduled and organized into 2021, so I am already committed. I hope all of you can enjoy your time diving as much as I have. I envy you the new equipment and areas that will open to you in the future.