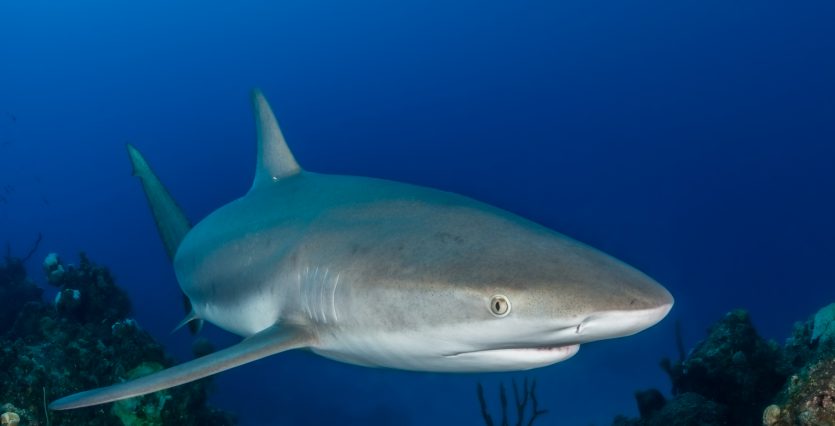 The Best Diving in the Bahamas

Picture 700 odd coral islands and cays scattered across some of the clearest waters on the planet. Throw in a few shipwrecks, deep walls, blue holes, canyons, a fantastic array of marine life, and white sand beaches and you have the Bahamas — a country seemingly designed with divers and diving in mind.

The subtropical climate, with more than 300 sunny days every year, makes for warm water dives that can be done all year round. Hurricane season hits between June and October, although this doesn’t stop some visitors. Pack your boardies and a rash vest because the water temperature sits at a balmy 31°C/88°F during the summer.

On land, the laid-back Carribean vibe and the warmth of the local Bahamians will have you seriously considering a permanent relocation.

Planning a Bahamas diving itinerary? Here are a few of our favorite sites and where to find them.

Dean’s Blue Hole located on Long Island is the second deepest Blue Hole in the world reaching a depth of 202m/663ft. The site is also home to what many believe in the largest submerged cavern in the world at 102m/350 feet long.

The real drawing card here is the geography of the blue hole itself, one of only several true blue holes in the world. But there are a few creatures who make their home here including snapper, turtles, rays, and schooling reef fish.

Watching the skilled freedivers who come here to train is a good way to pass the time during a safety stop. 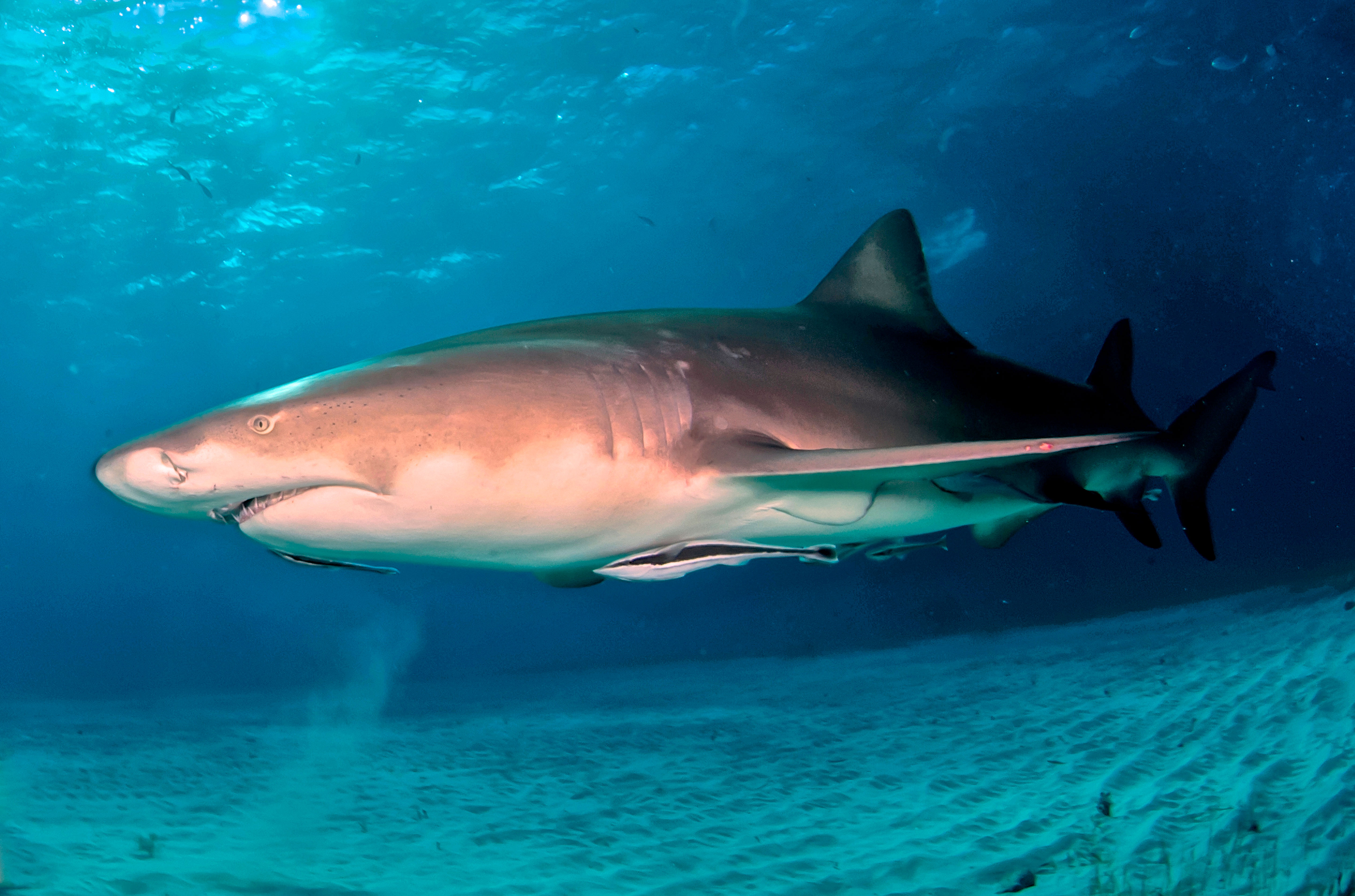 As the name suggests, this dive site off the coast of Grand Bahama is one of the best places in the entire world to dive with tiger sharks in all their toothy glory. Featured in publications such as National Geographic and many more, Tiger beach puts you in the middle of some serious apex predator action.

Although the dive is shallow and usually made at less than 10m/32ft depth, it is not suitable for all beginners. But if you’re an eager beginner and you feel comfortable diving with sharks, then go for it! Just listen to your crew’s safety instructions carefully.

Besides the tiger sharks, lemon sharks and Caribbean reef sharks are usually present. Divers can also spot nurse sharks, grouper, snapper, and on occasion, even dolphins. Hammerheads make appearances between November and March. 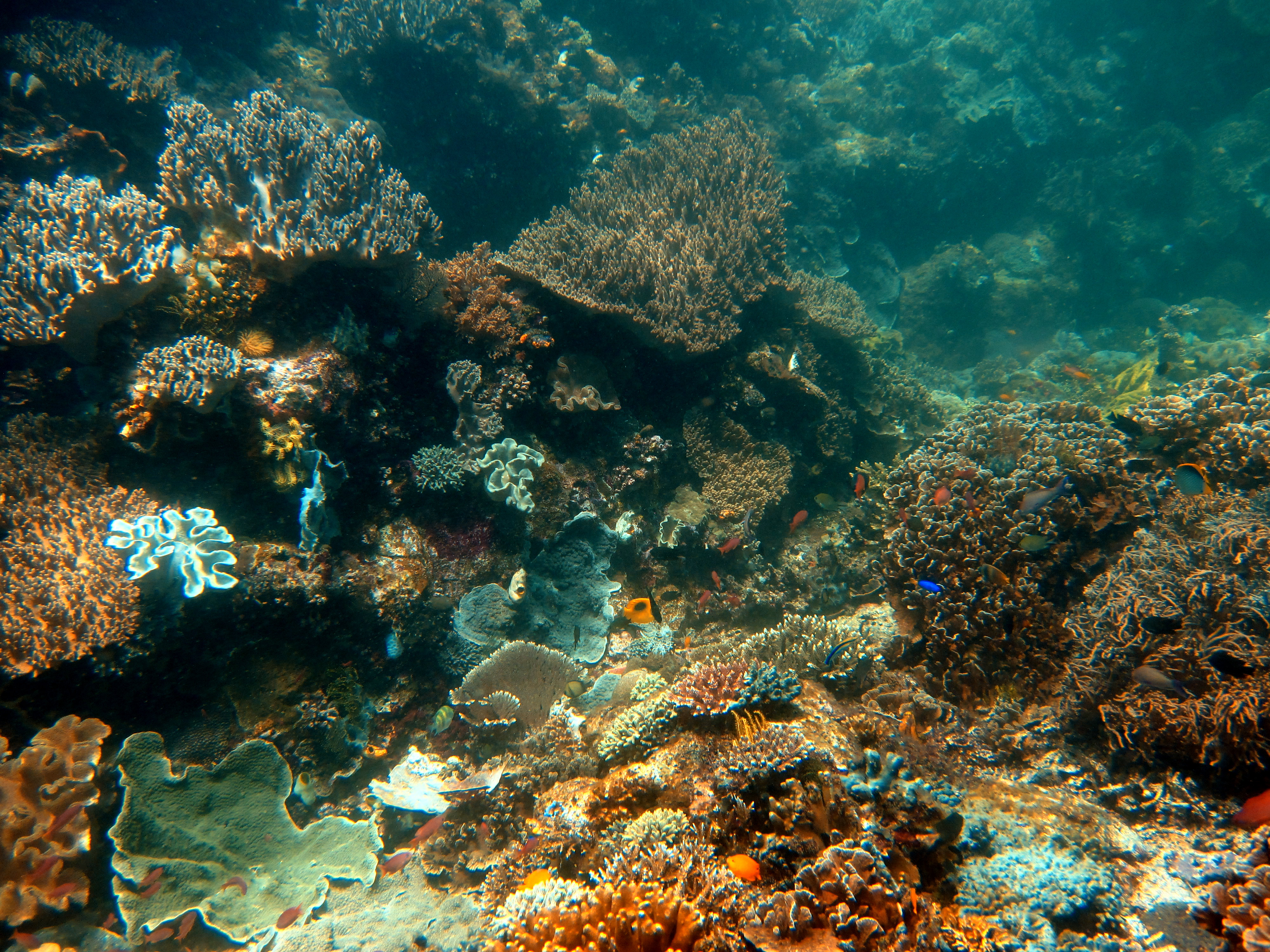 Victory Reef is more than a single dive, instead, it’s a full five-mile stretch of reef line off the coast of Bimini. Because the reef runs along the line of the Gulf stream, a whole variety of marine life thrives here, making the Victory Reef dive sites some of the most popular spots in the Bahamas.

The visibility is usually good and the sloping reef can be explored in the shallows to deeper depths of around 30m/98ft. When the current is running, which it often is, Victory is best done as a drift dive. Geographic features include swim-throughs, cliffs, and caves.

Mature hard and soft coral gardens blanket the reef’s wall while a multitude of sponges pop up in between the corals. Plenty of colorful reef fish dart in and out of the reef and in the blue, there’s always a chance a shark or a turtle will pass by. Macro photographers should bring their cameras and look inside the corals for shrimp. 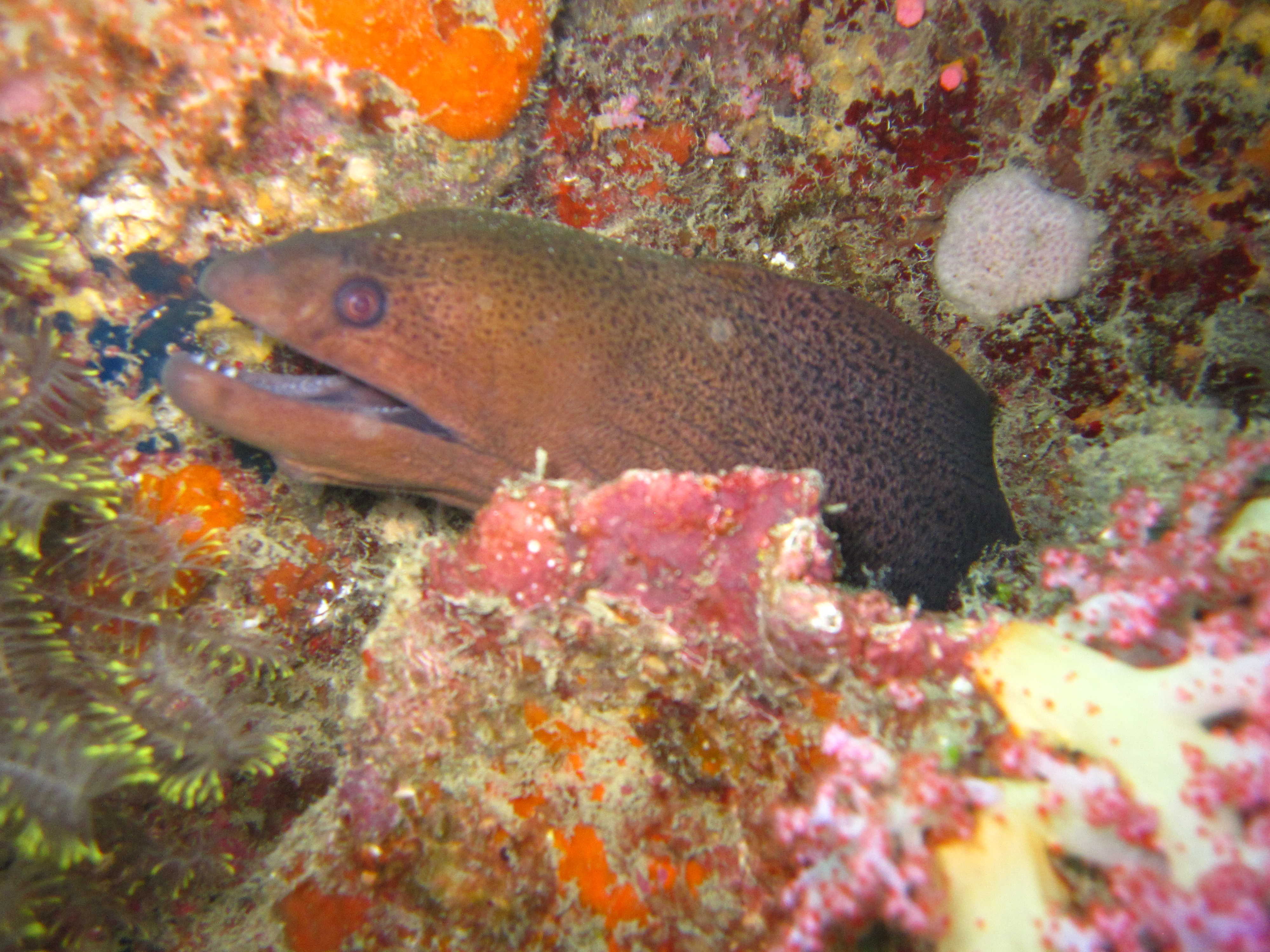 Andros, the largest island in the Bahamas, is home to many fantastic dive sites including the Crater. This small blue hole is well suited to beginner divers and those with more experience under their weight belts.

Divers usually explore around the edges first before sinking further down into the depths. Experienced divers can explore the cave system located on the outer walls of the blue hole.

The walls of the Crater are home to a thriving reef system and accompanying fish seeking shelter. Moray eels and rays make their way up and down the walls and turtles are commonly seen inside the Crater too.

Buckle up and hold onto your buoyancy because the beginning of this dive will have you tossed and turned like you’re actually in a washing machine — probably how the dive site got its name!

This drift dive begins shallow at just 4m/15ft with divers making a negative entry into an ever-present current which propels them swiftly through a crack in the reef and then over a coral garden. The remainder of the dive is spent at around 15m/49ft along the reef.

Those who dislike currents will be pleased to hear it stops after the first half of the dive and that there’s an alternate entrance to the site, just in case being flipped by opposing currents in the wash doesn’t appeal.

While it’s those few glorious moments of being somersaulted by the frothy waters that people really dive the Washing Machine for, the reef itself isn’t bad either. Nurse sharks rest on sandy patches on the bottom and turtles nibble on algae. 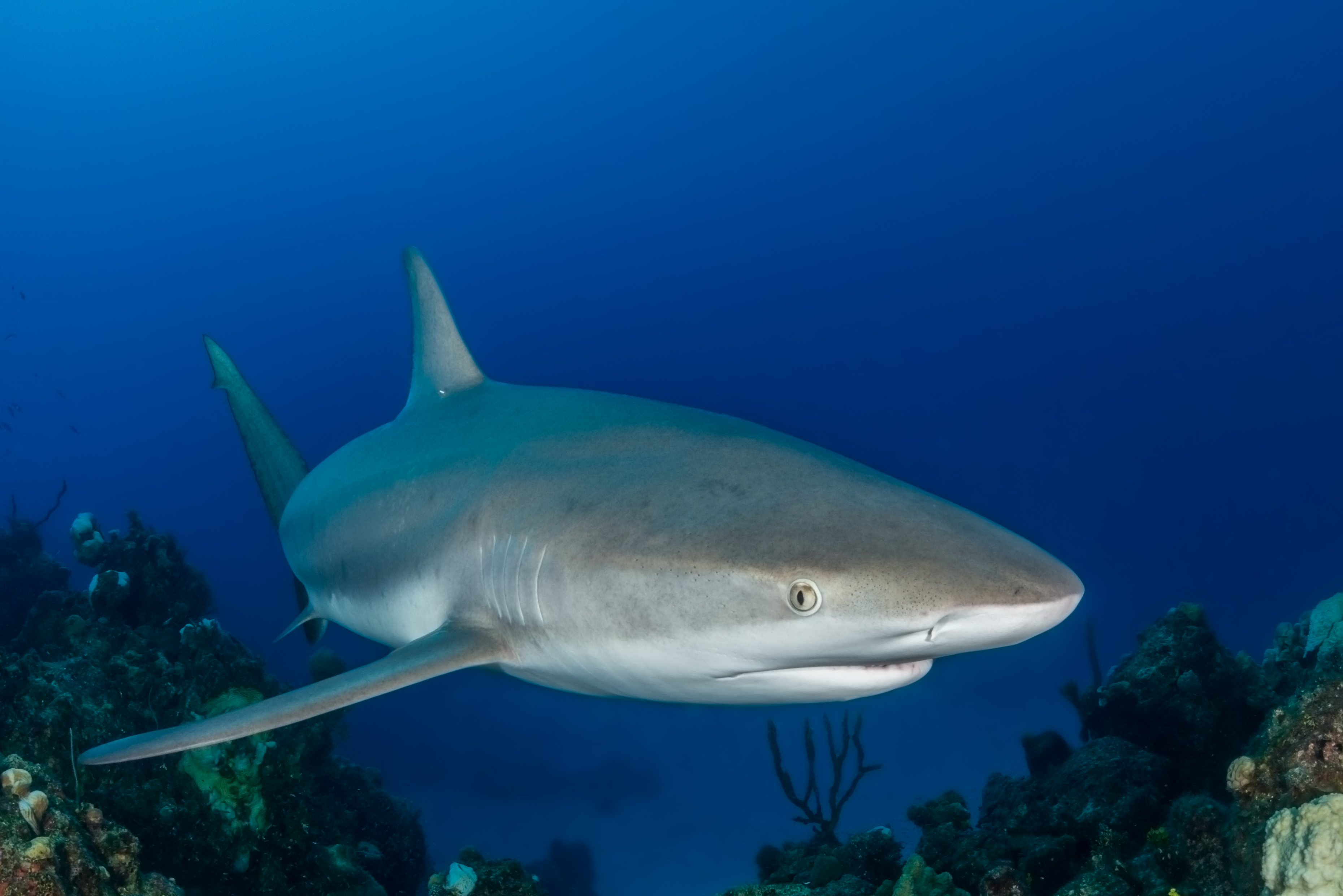 Runway Wall is located just off Nassau, also commonly referred to as New Providence Island. Many scuba enthusiasts consider Runway Wall an experience that shouldn’t be missed, offering perhaps one of the most electrifying and exciting encounters.

At a maximum depth of just 12m/40ft, diver’s holding any level of certification are qualified to submerge themselves at this famous dive site. Visibility is typically excellent all year long. This dive site is usually experienced in conjunction with a dive at one of three other famous sites in the area.

What makes Runway Wall in Nassau such an unmissable diving opportunity is the chance to come face to face with Caribbean reef sharks. In addition to swimming about with these sharks in their natural habitat, divers the world over have flocked here for the adrenaline-inducing shark-feed encounter.

Fancy yourself as a Bond guy or girl? Place yourself in the middle of the action on the James Bond Wrecks, two fully submerged ships accessible off the coast of New Providence Island. These sites garnered their Hollywood moniker after being featured in the British film series of the same name.

The deepest point is a shallow 13m/45ft, making these wrecks accessible for scuba divers of all levels.

The Tears of Allah wreck was featured in 1983’s Never Say Never Again, and the Vulcan bomber’s claim to fame comes from Thunderball which debuted in 1965. The former is actually a remake of the latter. Film aficionados with a penchant for underwater exploration flock to the James Bond Wrecks to experience their own little slice of cinematic history.

Qualified divers are able to penetrate the Tears of Allah wreck to admire the impressive coral structures thriving within. Both wrecks provide once-in-a-lifetime photo-ops that would make even Sean Connery envious.

Hollywood has been relying on the Bahamas to provide stunning backdrops both above and below the water since the 1940s. Like the James Bond Wrecks of New Providence Island, Thunderball Grotto in the Exumas has been featured in several films.

Also known as Staniel Cay, this stunning system of underwater caves has been shown off in Thunderball, Never Say Never Again, Into the Blue, and Splash.

Thunderball Grotto is a popular snorkeling site, but the diving here is nothing short of spectacular. Divers explore a healthy network maze of underwater caves and tunnels that are home to rich and colorful marine life.

Lobster, grouper, angelfish, and snapper are some of the most commonly seen creatures and if you’re lucky, you’ll catch a glimpse of a turtle or an octopus. The sunlight that shines through the surface between the rock formations creates an ethereal experience that has to be seen to be believed.

The S.S. Sapona went down in a hurricane off the coast of Bimini Island in 1926, almost 100 years ago. The cargo steamer’s remaining concrete framework provides a mysterious and eerie underwater experience for divers.

The ship’s rich history is riveting, from being commissioned by President Woodrow Wilson during World War I to its repurposed prohibition-era use as a place to hide alcohol by a British Army captain. This shallow wreck has a maximum depth of 5m/15ft, making it perfect for beginners.

Because the S.S. Sapona was so frequently used for target practice by the U.S. Navy and Air Force during World War II, what’s left of the ship is a hollowed-out playground for marine life, snorkelers, and scuba divers.

This interesting shipwreck is only partially submerged, making the view from above water just as entrancing as the experience beneath. King-sized lobsters and triggerfish have made the S.S. Sapona home. 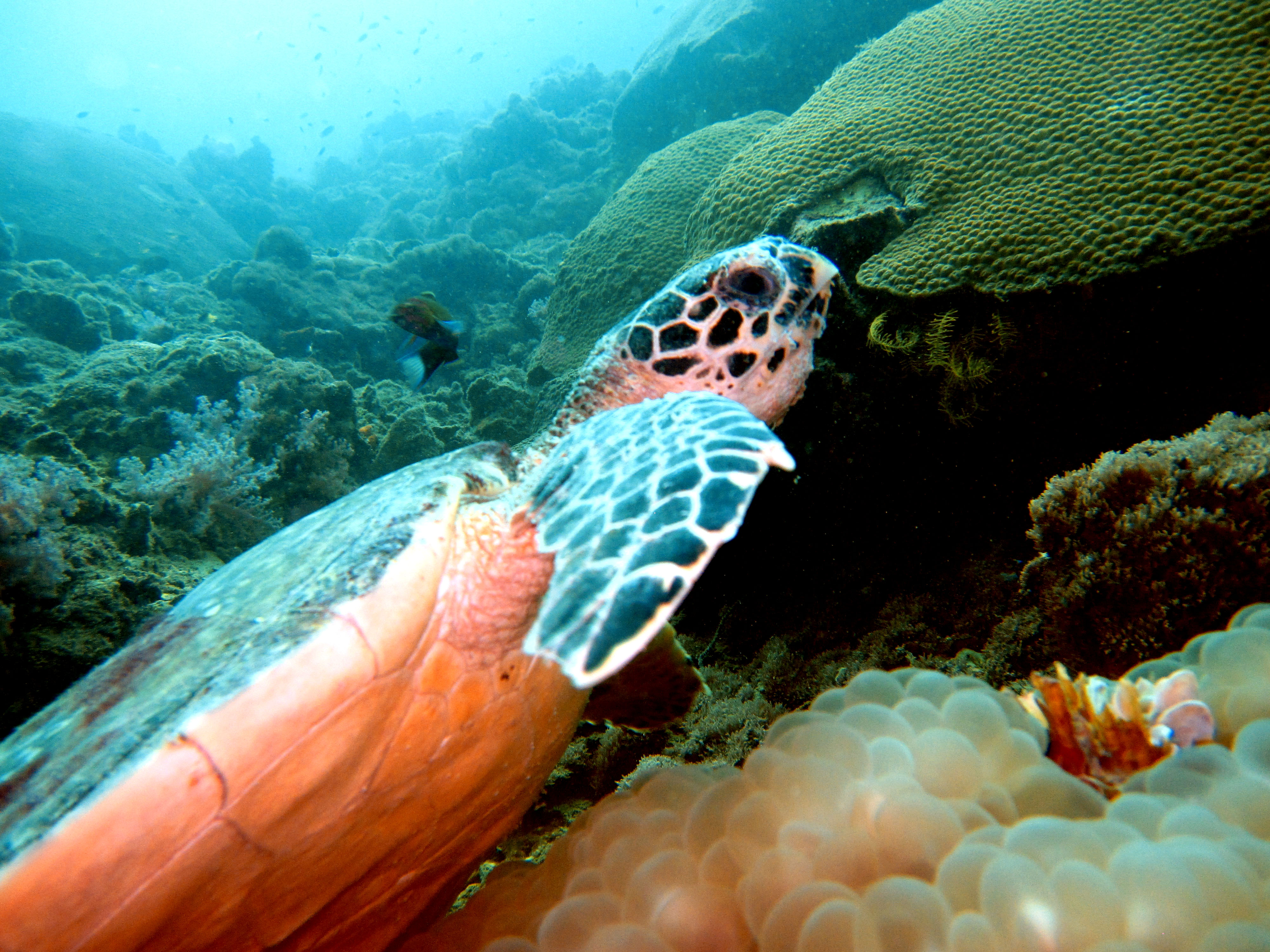 Located in the north off the Abacos Islands you’ll find The Towers, an interesting dive site with so much more to offer than just a pretty reef wall. With great visibility up to 30m/98ft, temperate waters, and depths from 17m/55ft to 23m/75ft, The Towers is a beautiful site that all divers can enjoy.

The main attraction at The Towers is the massive coral pinnacles reaching heights of an impressive 18m/58ft and peppered with lush carpets of coral, like a scene from a Dr. Seuss story. This dive site is a favorite among underwater photographers who like to capture extraordinary images.

Among the pinnacles, divers can also explore tunnels, swim-throughs, and caves where the occasional moray eel can be found hiding among blue tangs, angelfish, and yellow stingrays. Divers often spot turtles here as well.

When should you go to the Bahamas for diving?

The Bahamas is a year-round warm and the temperatures will seldom go below 75°F giving you perfect conditions for diving.

Rainy season is from June till October, and which brings rain about once a day and also the time of year where hurricanes can hit.

From November to May is the best time to visit, it’s the dry season with temperatures from 65-78°F. This is the time you’ll get a chance to dive with sharks.

So, what are you waiting for, start planning your next dive to the Bahamas. It’s a dive of a lifetime.