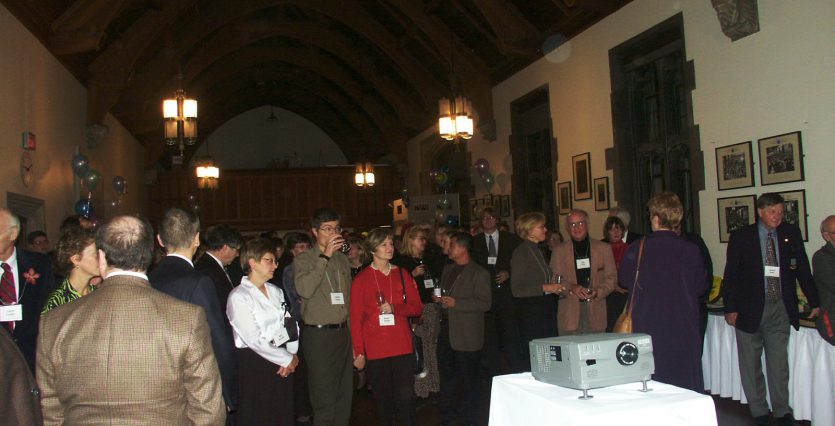 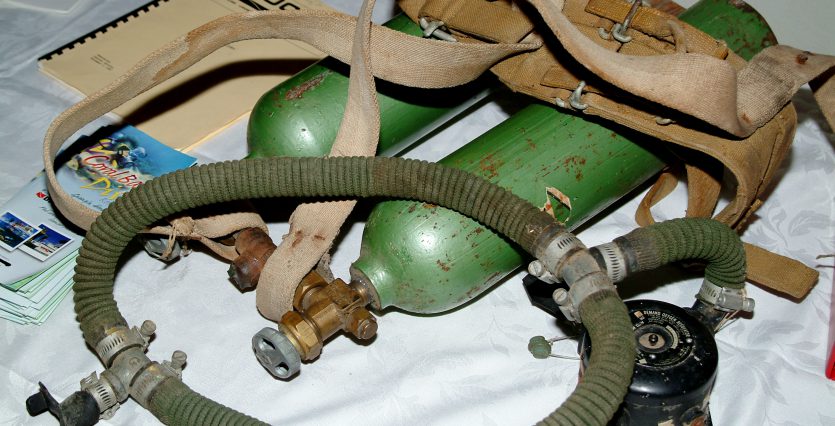 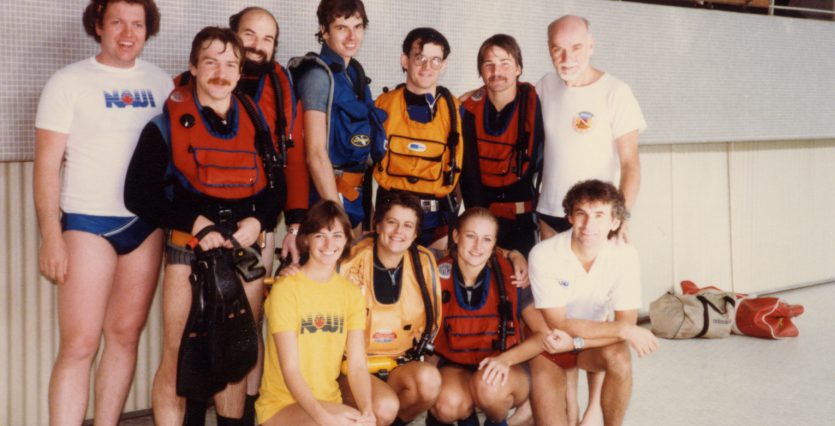 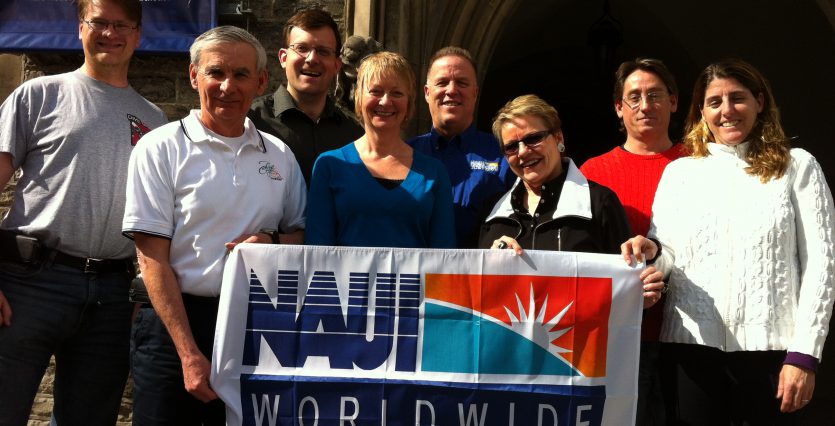 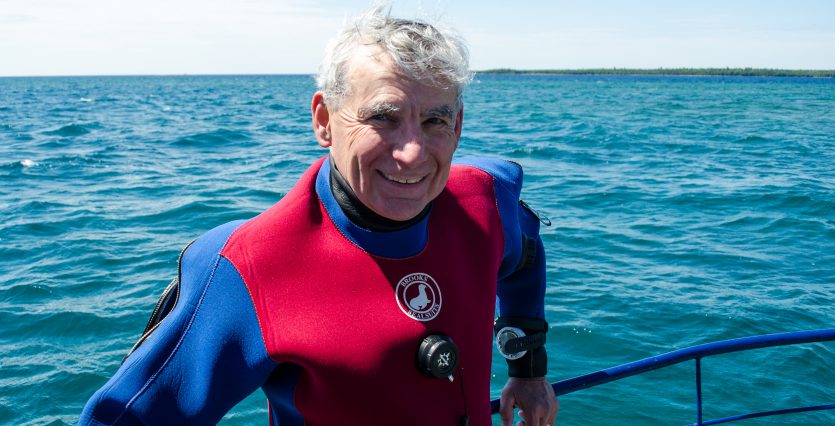 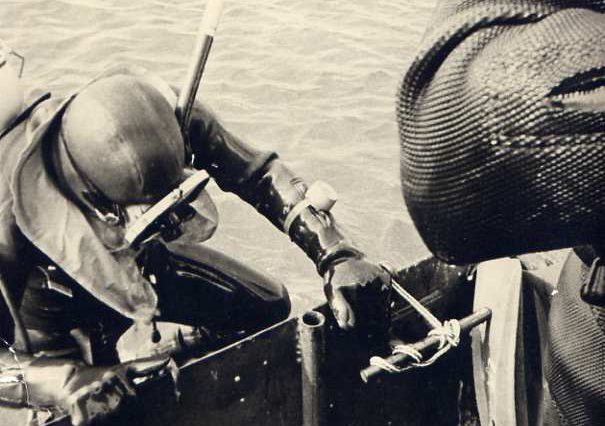 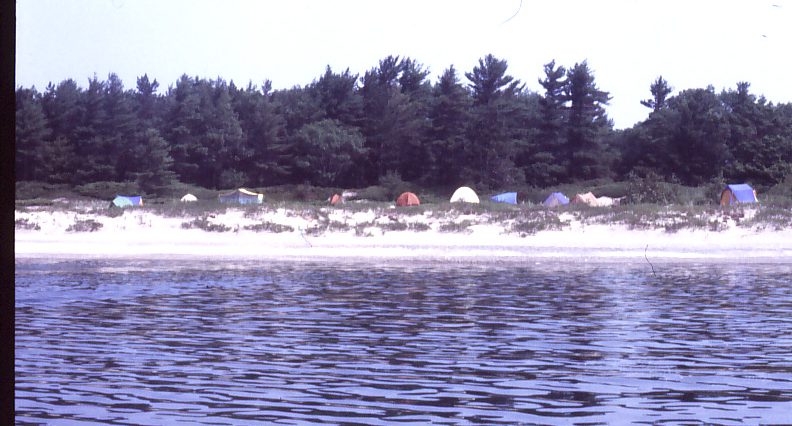 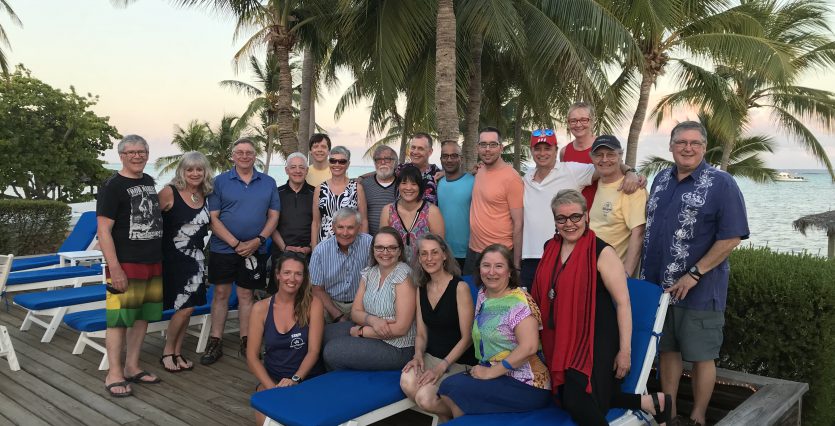 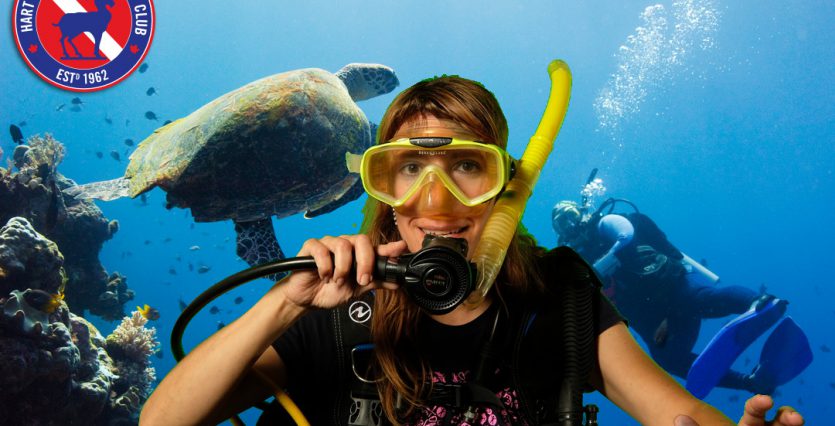 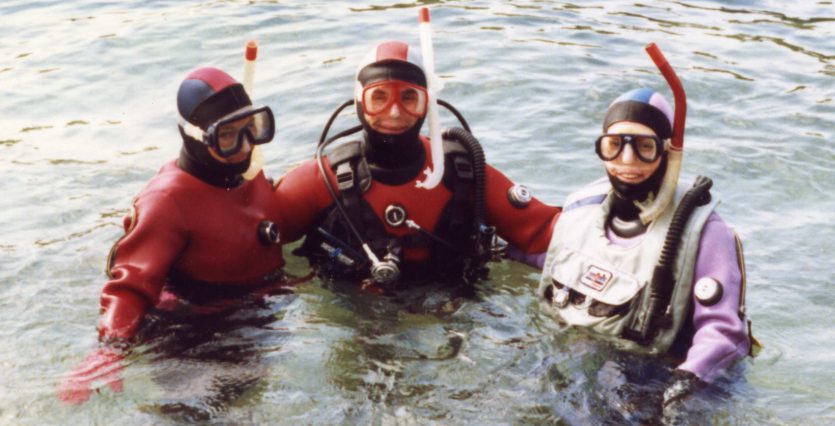 In a day and age where the diving industry has struggled to find ways to attract new divers, especially young divers, It’s a refreshing change to learn of a storied organization that has remained strong and vibrant since the dawn of sport diving in North America. The lessons that can be learned from their history and current status are a benefit to any dive professional looking to build or maintain an active diving population. In other articles of this issue of Sources, we focus on how to engage younger divers and gear them up and go diving with the family, but what happens after that? How do you keep college age (and beyond) divers engaged and diving for the rest of their lives? This is the story of how one organization has consistently done that — they’ve discovered the magic elixir for a successful, lifelong dive program. 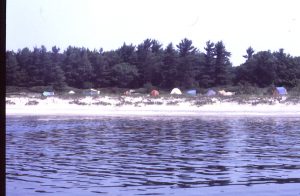 Hart House was founded in 1919 as a place where students and faculty at the University of Toronto could come together to participate in activities above and beyond what the university offered. It was intended as a place where discussion and interaction could occur between undergraduates, graduate students, and the faculty at a level that perhaps doesn’t exist in the more formal classroom. Much of their activities were built around various clubs, both academic- and sport-focused. So it comes as no surprise that when the third NAUI Instructor Course (the first outside of the U.S.) was hosted at the University of Toronto’s Hart House in the fall of 1961, a number of students looked on with fascination. Both directing the class and becoming certified as NAUI Instructors at the same time, Ben Davis (NAUI 101) and George Burt (NAUI 102) were among the 32 members of that historic NAUI Instructor Course that sparked the imagination of a number of Hart House members.

A year later, Hart House Underwater Club (HHUC) was born. At the time, a familiar story was popping up all over the place. Recreational scuba gear was becoming readily available, but there was not a lot of formalized training going on. Recognizing the need for this at the University of Toronto, HHUC ran its first course in the fall of 1962. It was taught by former Canadian Navy diver, Jack MacQuarrie. The only problem was he wasn’t qualified to issue certifications, and HHUC wanted that. A fortuitous connection, Davis, the cousin of the Warden of Hart House, was asked to return along with Burt to conduct NAUI certification courses for HHUC. It didn’t take long before HHUC had its own NAUI Instructors, and one special instructor rose to lead the club for many years.

The Foundation of a Dynasty

Dr. Don MacKenzie (NAUI 1069) was a physician and professor at the University of Toronto. It was largely under his guidance that HHUC became a powerhouse in the diving world. “He was very strong at bringing new people along within the club,” recounted Bob Belcher (NAUI 3836), who became involved with HHUC in its early days when he was an undergraduate in his fourth year at the University of Toronto. “He gave people responsibility and they responded. People wanted to do well for him and follow in his footsteps.” Belcher explained that Dr. MacKenzie had a very democratic approach to teaching courses at HHUC. They would take NAUI’s training standards and add a lot more to their classes since they often extended over the full length of the semester. 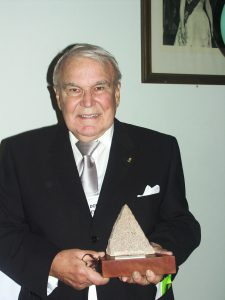 “Every drill and lesson was planned by a team of instructors. We’d have great debates about things like buddy breathing or the best entry techniques. It really made everyone feel like a part of the planning and design of our program,” says Belcher. Not only did it make the instructor staff feel a big part of it, but the students felt an instant bond to the club as well. Many of them climbed through the ranks to participate as divemasters or instructors themselves. Belcher, a 30-year high school teacher in the Toronto area, became HHUC training director in due course. The retention rate of divers from the program that remains involved is so high that HHUC courses typically (even to this day) enjoy a student to instructor/assistant ratio of 2-to-1!

However, there are many quality NAUI training programs out there, so what makes programs like this one and the one at Wright State University (that we wrote about not long ago) so ‘sticky?’ “Back when the club started,” recounts Belcher fondly, “the diving around Toronto wasn’t that interesting, so the club would plan road trips. We’d drive about four hours to go diving at Tobermory on Lake Huron. There were a lot of road trips that involved camping and diving. Since you’re only underwater a small portion of those trips, we spent a lot of time together topside just hanging out, eating and having a good time together. These trips fostered many long-lasting friendships and good times. There have even been a number of marriages over the years as a result.”

In Toronto, where the dive season is pretty short, HHUC decided not to limit their fun to those road trips or even just to diving. They held frequent social events during the long offseason. Costume parties, semi formals, ice floe races, holiday parties and another brainchild of Dr. MacKenzie, the “Inner-Space Lectures” that drew well-known people from the underwater world to the University of Toronto’s campus to present for HHUC. The bonding and socializing were so strong that many of HHUC’s members from those early days are still active with the club today. Among Belcher’s fondest memories are the Hope Island camping long weekends and Thanksgiving trips up to French River about 280 kilometers (175 miles) north of Toronto. Underwater they found relics of the beaver pelt trade from pioneer days, and topside they stayed in little cabins and enjoyed Thanksgiving dinner together, complete with turkey and all the trimmings. To continue the formation of such great memories, HHUC still organizes regular dive trips in which members from all generations participate.

“I just got back from a trip to Little Cayman in May,” says Belcher. “The ages of the club members on the trip ranged from their early 20s to their 70s.” [this is a good place for a group shot from Little Cayman that Bob included in his images] While Belcher won’t make it a competition, Larry Lundy’s track record is a goal many HHUC members hope to achieve. Lundy was among HHUC’s original four certifications and continued to dive with the club for around 50 years — well into his 70s.

As is natural with every organization, no matter how great, there have been some ebbs and flows over the years. Current HHUC training director Alex Ayers (NAUI 51979) explains: “At some point in the history of the club, things shifted to be really training-focused, and much of the social aspect of the club went away. With the cost of tuition and travel increasing, it makes participating in diving more of a challenge for many students.”

Ayers started diving with HHUC in 2002 while he was studying engineering and has been active ever since. Fueled by the expressions on people’s faces when they experience scuba for the first time, he regularly relives that excitement through his students. Currently, an aerospace engineer for Pratt & Whitney Canada, a manufacturer of aircraft engines, Ayers believes his experience in HHUC contributes to his professional success and vice versa. “A lot of decisions I have to make on a daily basis [at work] have to do with risk management and motivating people. Many of the leadership skills I’ve developed through the club have been invaluable.” 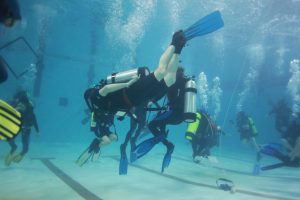 When asked about the magic elixir that keeps HHUC members so dedicated, specifically the bonding that happens over those local dive trips, he responds, “One challenge we face today is a tightening of student travel policies that HHUC is subject to under the umbrella of the University of Toronto. The days where we could plan a trip and simply drive out to our favorite dive sites are no more. Currently, club outings beyond 100 kilometers (62 miles) of the University have restrictions such as requiring students to be driven by a non-student in a rental car, or professional transportation services, and possibly attending safety workshops.” The volunteer efforts and costs tied to fulfill these policies have hurt HHUC’s local dive trips that were once a mainstay of the organization over the years.

Yet Ayers maintains that there are ways for HHUC to function successfully in the context of such a policy change. He continues: “We’ve been able to offer a low-cost annual dive trip to Cuba simply because the travel is fully arranged by professionals. This has now become a very popular option with students on a tight budget.” With access to two pools, campus classrooms, 40 full sets of scuba gear and an air-fill station in a room next to the pool deck, “The University offers us a great place to function as a scuba club and gives us prime visibility to a younger generation of divers.”

Other good things have come about, such as the revival of social events with an interesting twist. “I notice that a lot of our current instructors are at a similar life stage as myself.” Ayers has a 13-month-old child. “Now we plan outings that can be fun for the entire family.” The Hart House farm is well within the allowed travel boundary, so HHUC has held social events there in recent times that harken back to when Belcher’s generation used to gather there. They’ve also brought back monthly socials that include guest lecturers and/or tours. For example, they’re going on a tour of the Toronto Police Services Marine Unit facility this month, and they recently invited a commercial astronaut to speak to them about his underwater training experiences.

In addition, they’re making headway gaining new recruits again by adding more Try Scuba experiences. Other areas into which they’re expanding are underwater hockey and a popular skin-dive fitness class held once a week that is open to non-divers as well. All of these offerings are great touchpoints from which they’re onboarding young people into their scuba classes.

“Lately, we’re getting back to our roots of being a community,” says Ayers. “Training is still strong, but what are the things beyond the scope of training that will keep people engaged?” Ayers asks, but he already knows the answer. “There’s something about our program that forms strong bonds. It’s spending time diving and doing other things together. I keep in touch with some of my friends from my days in the engineering school, but my closest friends, the ones I’m active with, are friends from HHUC.” For Ayers, Belcher and the hundreds of other HHUC alumni, there’s no denying the bond they all share. They’ve been going strong for 55 years, and thanks to the culture and history they’ve established, the future looks bright.

What’s Available at Your Local Colleges and Universities?

While places like the University of Toronto and Wright State University are all set with strong scuba programs, are there any colleges or universities in your area that don’t have a scuba program? It’s something every NAUI dive center should consider. A strong collegiate program will produce a never-ending stream of scuba diver students, and with the right culture and guidance, a strong collegiate club could become a huge asset. Contact marketing@naui.org to find out more about the NAUI affiliate program.