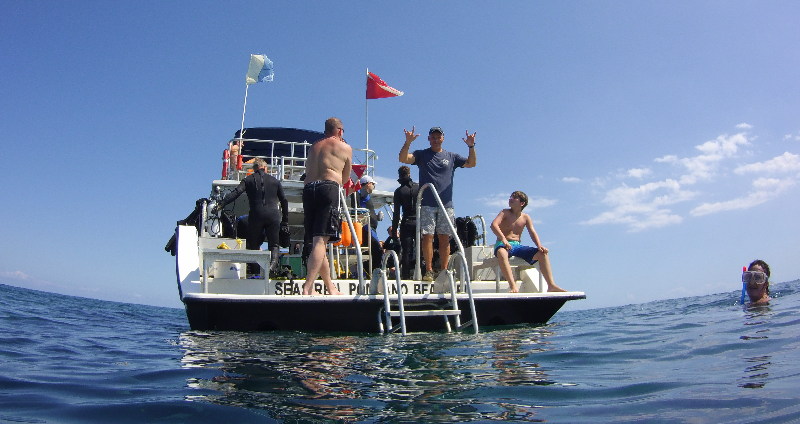 The last voyage of the steamship Copenhagen began on May 20, 1900. The ship was carrying 4,940 tons of coal from Philadelphia bound for Havana, Cuba. It was a large steel-hulled vessel, 99 meters (325 feet) long with a 14-meter (47-foot) beam. Approaching 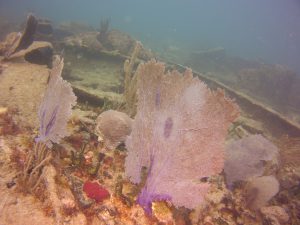 South Florida, Captain William S. Jones left his chief officer on deck and retired for the night after ordering the course to be set south-southeast after passing the Jupiter Inlet lighthouse.

When Jones returned to his post, he miscalculated the ship’s position, and the Copenhagen was steaming at full speed when it struck what is called the first reef, about 1.2 kilometers (three-quarters of a mile) off Pompano Beach, Florida.

The Copenhagen’s crew of 26, along with local helpers, labored for days to remove its cargo of coal. The ship’s engines were reversed, pumps engaged to remove water from the leaking hull hoping to refloat it. Salvage vessels arrived on the scene to try and pull the Copenhagen off the reef. It was stuck fast, and they couldn’t get it off. 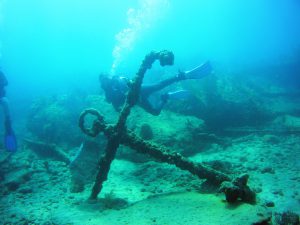 Eventually, the $250,000 vessel was abandoned as a total loss and left wedged on the reef. For a long time the wreck just sat there until it became a hazard to navigation. During World War II, Naval aviators used the wreckage for target practice. The wreck was by-and-large forgotten save as a place for anglers to cast their lines.

“The Copenhagen is a State of Florida Underwater Archaeological Preserve. When it wrecked in 1900, it was on top of the reef. They took a cable and sheared it off,” said Bryan Armstrong, manager of the Pompano Dive Center located on the Intracoastal Waterway just north of Atlantic Avenue Bridge on Riverside Drive.

“The anchor sits in the sand. You can see the ribs and plates of the vessel,” he said. The dive center takes snorkelers and scuba divers to the shipwreck. It is a 20-minute cruise north from the dive center to the Hillsboro Inlet passage to the Atlantic Ocean. From the inlet it is a fast 15-minute run south. 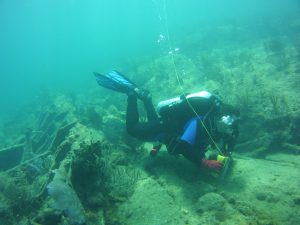 There are fixed moorings all along the reef line, which enables boaters to tie off without anchoring. It is sound policy to protect the fragile reefs below from anchor damage. Once tied off, divers jump off the stern of the boat and discover the Copenhagen for themselves.

Florida created underwater archaeological preserves throughout the state. The Lofthus, another shipwreck that came ashore north of the inlet at Boynton Beach, is also part of Florida’s underwater archaeological preservation project. The idea behind the program is to offer sites of historic interest for divers and snorkelers to enjoy. No collecting of artifacts or disturbing the remains of the ships is permitted on the sites themselves so they may be enjoyed by future generations. In many cases the wreckage has become part of the living reef and is overgrown with corals and sponges, inhabited by fish and crustaceans.

The Copenhagen was nominated to become part of Florida’s Archaeological Preserve in 1994. It was listed on the National Register of Historic Places in 2001. Pompano Dive Center provides divers brochures produced by the Florida Department of State that include a diagram of the vessel’s underwater remains. It sits in 3.5 to 4.5 meters (12-15 feet) of water to the top of the wreckage, 6 to 8.5 meters (20-28 feet) to the sand,” Armstrong explains.

The Pompano Dive Center operates three boats. One is a 36-foot Newton called Sea Dog Diver rated for 20 passengers. The Center limits the vessel to 15 to prevent crowding. Their Newton Sea Siren is rated for 36 divers that they limit to 28. The Sea Pup Diver, a 30-foot Island Hopper, is rated for 14 and is limited to 10 divers.

The wreckage of the Copenhagen is spread out over a good distance underwater. The anchor is at the southernmost end of the shipwreck in the sand. A plaque has been placed nearby designating the SS Copenhagen as an underwater preserve. Fan corals grow on the iron structures. Fish dart in and out of twisted steel plates.

The ship was built with a double bottom to separate the inner and outer hulls. This design afforded safety in the event of collision. Large pieces of the intact hull and steel ribs offer underwater photographers a chance to frame subjects.

The wreckage of the ship has become an artificial reef. Coral growth is everywhere. There are places where the eye has difficulty detecting where the reef ledge ends and pieces of the shipwreck begin. Sea fans sway and soft corals decorate the hull. Depending on

the Gulf Stream there may be current. Each buddy dive team is given a flag and float with a reel to take with them. The wreck is a fun dive for snorkelers, beginning Scuba divers and experienced divers alike.

Diving shipwrecks is like turning back the clock and discovering history. The turn of the century saw the advent of steam power over sail. Many vessels, including the Copenhagen, still had masts to take advantage of wind power in the event of engine failure.

For information and to dive on the SS Copenhagen, visit pompanodivecenter.com or call 954-788-0208.