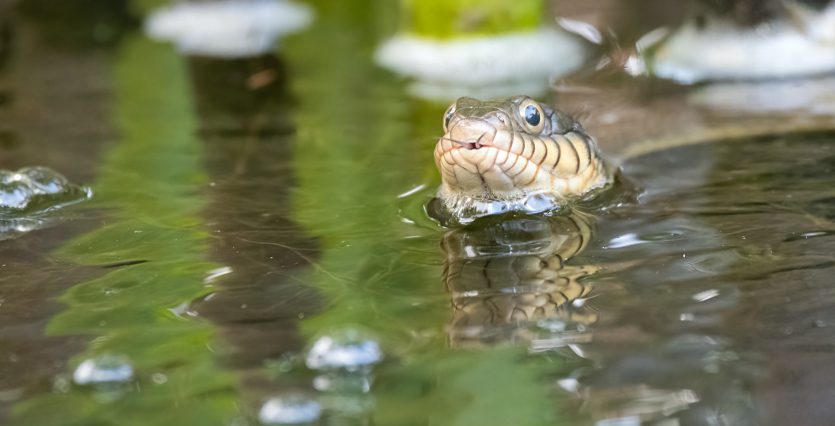 Found in marshes and bodies of water throughout the eastern and central United States, water snakes are a staple of American wetlands.

When you’re swimming, hiking, kayaking, or scuba diving anywhere in this half of the country, you’re likely to come across these water-loving serpents eventually.

Yet despite their prevalence, most people don’t know a lot about them.

Misinformation and cases of mistaken identity are pretty common around these species, which can lead to potentially dangerous situations for both people and the snakes.

So if you’re planning to be somewhere you may encounter water snakes, or already do regularly and just want to know more, this article aims to provide everything you need to know about these unique reptiles!

What are water snakes?

Water snakes are fairly common, semiaquatic snakes found throughout the world, though primarily in the Northern Hemisphere and most predominately in eastern North America.

They are members of the Colubridae family, the largest and most diverse group of snakes.

While there are numerous different species of water snake, they share many common features: thick but stream-lined bodies that are excellent at swimming, protective keeled/overlapping scales, and a fairly moderate-to-large size (with most adults ranging between 3 and 5 feet in length).

Since they spend their lives around water, their diet is mostly made up of aquatic and semiaquatic animals, like fish, amphibians, and other reptiles.

They can come in a wide variety of colors and patterns, and many of these designs can look very similar to other snake species. This is especially common with the North American species, which are regularly mistaken for venomous snakes such as the cottonmouth and copperhead (and vice-versa).

Similarly, their aquatic lifestyle can often lead to the assumption that they, like many famously dangerous sea snakes, are venomous. But this isn’t true.

Water snakes are not venomous and pose no serious threat to humans.

However, they are typically ill-tempered and prone to biting or spraying a foul-smelling musk when bothered – so it’s generally a good idea to leave them be if encountered.

Where do water snakes live?

As you’d probably expect by the name, water snakes prefer to live their lives in and around bodies of water.

This can include anything from ponds and streams to rivers, lakes, and swamp – and anywhere from the southern Midwest states like Texas and Oklahoma to the far Northeast of Maine, New Hampshire, and even some closer Canadian provinces like Ontario.

Generally speaking, any freshwater bodies can be home to a water snake population. And while these snakes can be found in brackish and occasionally even salty coastal waters, they are not sea snakes and can’t live long-term in the ocean like them.

What is the most common water snake?

The most common species of water snake you may encounter is, unsurprisingly, the Common water snake (Nerodia sipedon).

Also called the Northern, Eastern, Black, and Brown water snake, these reptiles can be found all throughout central and eastern North America, from Texas and Florida all the way up to the Canadian provinces of Ontario and Quebec.

Common water snakes are thick-bodied, rough/keeled scaled, and come in a variety of brown, black, and gray colors.

They are also highly recognizable by the prominent banded pattern running down their body – though kind of confusingly, the Southern water snake (Nerodia fasciata) got the name ‘banded water snake’ instead.

How do we distinguish water snakes from others?

Despite being members of the Colubrid snake family, water snakes share many physical and lifestyle traits with members of the Viper family, like the cottonmouth and copperhead snakes, making cases of mistaken identity quite common.

This can be dangerous, as while water snakes – like most other Colubridae – are not venomous and pose no threat to humans, vipers are venomous and can cause serious injury if you’re not careful.

As such, it’s important to be able to tell the difference between them, and fortunately there are a few key features that you can learn that make this easier.

Do venomous snakes swim on top of water?

In recent years, there has been an idea going around that you can determine whether or not a snake is venomous by how it swims: if its whole body is on top of the water, it’s venomous, and if its submerged or only its head is above the water, it’s not.

While this can generally be considered true in the eastern United States – more due to the specific species than anything to do with being venomous itself – it is important to know that this is not a reliable method of distinguishment.

Venomous species of the east, like the copperhead, cottonmouth, and rattlesnakes do tend to swim with their whole body afloat above the surface while non-venomous species like garter or water snake tend to swim under the water or with only their head above.

However, this is only a general trend, not a rule.

These venomous species are all vipers, which have wider bodies that float more easily, while the non-venomous snakes mentioned are colubrids which have sleeker, more stream-lined bodies that cut through water easier.

While the snakes of the eastern U.S. do generally follow this idea, but they are all just as capable of not following and swimming differently. Therefore, using swimming style to try and tell if a snake is venomous or not is not a reliable or safe idea.

Are water snakes good to have around or dangerous?

Despite their often-mistaken identity, and the reputation that comes with, water snakes are an important part of their environment and play a major role in aquatic ecosystems.

As predators, they reduce and help control the populations of their prey, such as fish, amphibians, and other reptiles.

By feeding on dead or diseased animals, they also help reduce the spread of diseases and maintain a healthy overall ecosystem.

However, this only holds true for where they are native to. Invasive water snakes, like those in California, are damaging to the environments they invade, and pose a threat to native species they prey on or compete with, like the California giant garter snake.

Water snakes are a unique species of colubrid snake that can be found all over the world, but are especially common in central and eastern North America.

As their name would imply, they are semiaquatic and spend most of time in wetlands and bodies of water.

They are not venomous, but their thick bodies and typically banded pattern makes it easy to mistake them for various actually venomous snakes. Fortunately, there are many different features that can be used to identify which species are which – which can be very important to know if either are encountered.

Water snakes also play an important role in maintaining the health of aquatic ecosystems and pose no danger to human life.

Overall, they are incredibly interesting reptiles despite their seeming mundanity, and should respected and protected as such.